And on the seventh day of Guardian's Gala, I won the event. 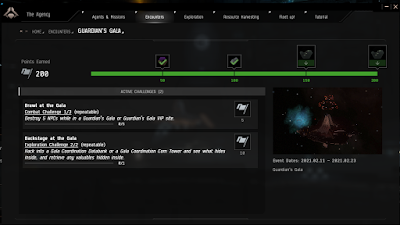 I finished receiving the 7 login rewards and wanted to finish up getting the last two participation rewards. All I needed was 65 points. Each Gala exploration site gives 15 points, so I needed to run 5 sites, right? Wrong.

I alluded to finding a possible exploit on day 4 of the event. At the time, I had only seen a description of the exploit on the EVE Online sub-Reddit. But now Imperium News has also published the exploit. Since I don't want anything more to do with Guardian's Gala this year, I went ahead and turned 15 points into 65.

I probed down and entered a site to get 5 points. I then hacked a can to get 10 more points. Upon hacking the can, the challenge changed back to "Enter a site". So I warped to a nearby structure and warped back to the site, receiving 5 points. Rinse and repeat until I got 65 points. Event over.

The only thing left to do now is cash in my loot. I have to dip into low sec to sell off the Overseer's Personal Effects that dropped. Then I have to take the regular drops to a trade hub and sell them there. One thing I don't have to worry about is everything I received from the redeem queue. Anything from the redeem queue is applied to the character that claims the item. That goes for the SKINs as well as the skill points.

Since Super Kerr-Induced Nanocoatings (SKINs) were introduced to the game in 2015, I have not applied a single one to a character. At least, knowingly. Apparently, I've applied 17. 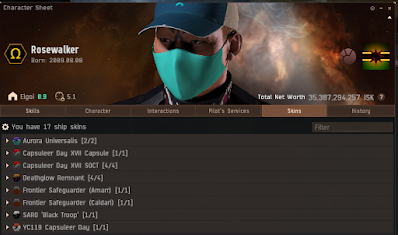 I don't know how long the Skins tab has existed in the character sheet, but I think I'll start applying SKINs to characters just to get rid of a lot of clutter. The only reason for not applying the SKINs was to keep track of them. With the SKINs tab, that reason went away.

I probably have one more blog post to write in my coverage of the 2021 edition of Guardian's Gala. But I'm done with the content. All I have now is the clean up.