What a difference a day makes! 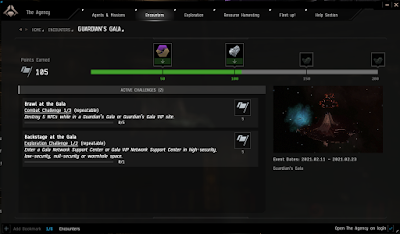 I had only managed to acquire 25 points through the first three days by trying to kill the Serpentis and Guardian Angels. Sunday, I earned 80 points by sneaking up on them and hacking their sites.

The challenge is finding a system with a site in it. I found one in the 15th system I flew through. Then I found three others in the same system. For those who don't know, EVE's site spawning mechanics have a tendency to dump all the sites in one system in a constellation. If you know where those systems are, you can rack up a lot of points in a hurry.

I wound up having to fly back to my home station in order to redeem my prizes in the right place. I received the Rifter Amaranthine Mantle SKIN and the Agency Support Drop. The contents of the drop are randomized. I wound up with a booster with a speed bonus. 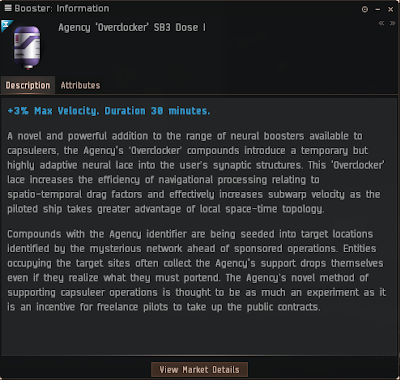 Overall, I was averaging about 5-6 million ISK per site in drops. The four sites I found were in high sec. Half my route was in low sec, where I did not find any sites. I didn't make it to null sec, as I filled up my cargo hold a couple of jumps away.

The only other thing I can report is the existence of a possible exploit. Due to the EVE Online Terms of Service, I'm going to refrain from discussing the details of the exploit. I'll just note that if I had used the exploit, I would have a lot more than 105 points. I don't know how CCP will react, but they could conceivably take account action, such as issuing suspensions, to those who used it. I don't know if the damage of spreading the details is bad enough for the devs to start issuing bans, buy why take the chance?