On 6 September 2018, Pearl Abyss announced the purchase of CCP Games for the reported sum of $425 million. The $425 million figure included a cash settlement plus incentive bonuses for performance after the sale. The website mbl.is provided coverage on a page that worked with Google Translate. The final purchase price after performance bonuses? $225 million.

The purchase price that the South Korean game company Pearl Abyss pays for CCP decreases by 47% from what it could amount to - from 425 million US dollars, equivalent to more than 54 billion ISK, to 225 million dollars, almost 29 billion ISK. This is stated in a news item in Viðskiptablaðið today.

In my reading of the situation, the peformance goals were not just monetary ones. At the time the sale was announced, CCP had three games in development. The big one was Project Nova, an first person shooter set in the EVE universe. Also under development was the mobile game under development with PlayRaven, EVE: War of Ascension. An augmented reality game, EVE: Infinite Galaxy, was under development by the giant Chinese game developer NetEase. None of the three games reached the market, although Project Nova & EVE: War of Ascension did make appearances at EVE conventions. CCP did continue working with NetEase, releasing a regular mobile game, EVE Echoes, in August 2020.

I would even go so far as state CCP's failure to complete development of Project Nova hurt Pearl Abyss financially. When the Korean company purchased CCP, the game release schedule looked like this...

Without a major release last year, Pearl Abyss' revenue dropped 8.8% (₩47 billion) in 2020. Also, without the presence of a major game, investors are pressing PA about how they will maintain and grow revenue until Crimson Desert launches sometime in the fourth quarter of this year. Pressure is even growing on the company's release schedule for DokeV and Plan 8, much less Crimson Desert. 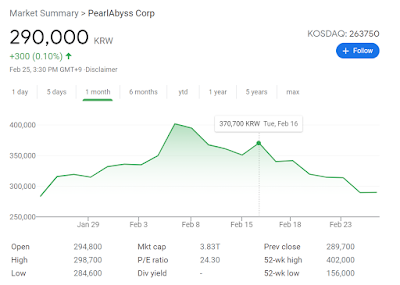 Given what we know now, up to $200 million in performance bonuses was a worthwhile offer. Since the earnings call on 16 February, the value of Pearl Abyss stock has declined by 21.7%. While still 85.7% over the company's 52-week low, the drop in revenue hurt expectations. Imagine the stock's value if PA had rising revenue.

I don't want to dismiss any revenue goal. I imagine that Pearl Abyss was expecting the EVE IP to deliver the revenue it received in 2020 in 2019. Then, Project Nova would launch in 2020 and total EVE revenue would far exceed last year's ₩73.6 billion ($63.2 million). But for a publicly traded company like Pearl Abyss, I have to believe delivering games is just as important as delivering revenue. And Pearl Abyss didn't receive three games it thought it had purchased.