Over the weekend I defeated Elidibus in The Seat of Sacrifice and completed the main scenario questline in Patch 5.3, Reflections in Crystal. I'm on the brink of entering the new 5.4 dungeon, Matoya's Relict, the last major hurdle to reaching the end of the MSQ. Even taking my time with the final few quests, I'll have reached the end of the story in about 18 months.

The main story reached its conclusion at the end of Patch 5.3, so I can safely say that Shadowlands is the best expansion I've ever played in an MMORPG. These last patches are setting up the story for the next expansion so will not have any impact on my enjoyment of Shadowlands. The difference between the latest expansion and other expansions is the emotional payoff.

The driving force in the Shadowlands story is the main antagonist, the Ascian Emet-Selch. 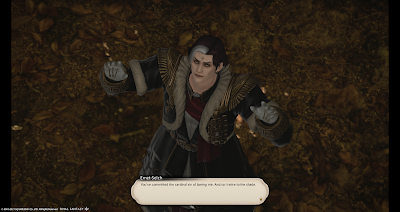 FFXIV is the only Final Fantasy game I have played, but at least in the MMORPG, the best story arcs are the ones in which the storyteller humanizes all the participants and introduces some moral ambiguity into the conflict. I think that's what made the Heavensward expansion story so powerful. In Shadowbringers, Square turned up the impact to 11. Natsuko Ishikawa, the lead main scenario writer, did a tremendous job of turning what could have been a one-dimensional villain into a fan favorite. I see Emet-Selch somewhat of a cross between Q from Star Trek: The Next Generation and Darth Vader.

If I can get the last 7 quests completed, I can then consider levelling up a second job until the release of Patch 5.5. Square Enix is presenting an announcement showcase Friday night I need to see. And for the first time in a long, long time I will be caught up to participate in new content when released.

Posted by NoizyGamer at 9:34 PM