Pearl Abyss held a call for investors covering its fourth quarter 2020 & full year 2020 financial results on Tuesday. One economic point Pearl Abyss brought up in the call was the strengthening value of the South Korean won (KRW) vs global currencies in the fourth quarter. Left unsaid was a callout about the U.S. dollar, which fell 6.9% against the won in Q4. While in better shape, the euro did fall 2.5% against the won in the same period. When converting KRW to USD in this post, I will use the historical exchange rates found on xe.com. 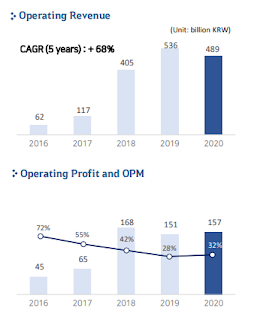 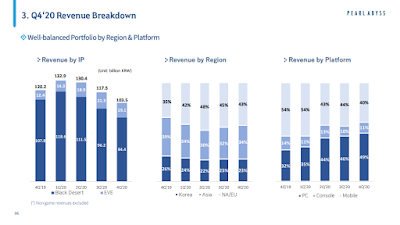 Q4 2020 was not a good quarter for Pearl Abyss financially. Revenue fell by ₩14 billion (11.9%) quarter-over-quarter (QoQ) and ₩16.8 billion compared to the fourth quarter of 2019. As might be expected with the growing strength of the won vs major western currencies like the dollar & euro, the largest loss of revenue occurred in North America and Europe. Revenue in the western countries fell 15.9% QoQ, from ₩52.9 billion ($45.3 million) down to ₩44.5 billion ($40.9 million). Year-over-year figures painted a brighter picture, as revenue grew from ₩42.1 billion to ₩44.5 billion (5.7%).
Of even bigger concern is the drop in mobile gaming revenue. Mobile games in total accounted for a ₩10.3 billion drop in income from Q3 (₩51.7 billion, $44.2 million) to Q4 (₩41.4 billion, $38.0 million). A 19.9% drop in revenue represents a lot more than the rising strength of the won. The imposition of stricter lockdowns in many parts of the world due to the COVID-19 pandemic in Q4 is probably another major cause of the decline. In the pre-COVID world of Q4 2019, mobile games made up 54% of PA's revenue. In Q4 2020, that had declined down to 40%. The resulting 36.2% decline in YoY revenue (₩23.5 billion) was more than PC and console products could make up. 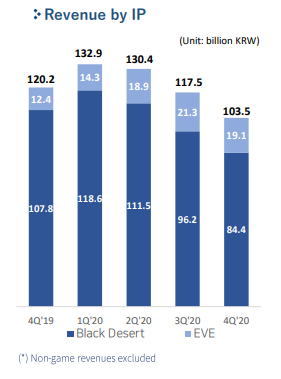 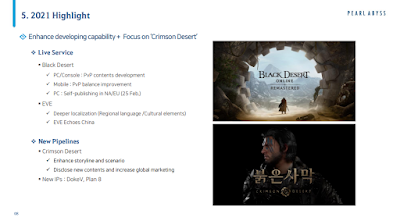 Upcoming for 2021, Pearl Abyss is looking to improve PvP in Black Desert. For PC and consoles, PA is looking to what sounds like 10-character pre-made parties to go into PvP areas. For Black Desert Mobile, that game will soon receive its biggest PvP upgrade patch. Pearl Abyss will also begin self-publishing Black Desert Online in North America and Europe beginning 25 February. PA expects self-publishing will result in greater revenue growth as the NA/EU region accounts for 50% of BDO accounts.
For EVE, PA would like to expand into the Asian market, and pointed to the December introduction of a Japanese client as part of the effort. Players can expect a greater effort to introduce content attractive to Asian players into the game in the upcoming year. Earlier this month, Pearl Abyss received a license from the Chinese government to operate EVE Echoes in China and is working quickly to launch the game in the world's largest mobile games market.
Pearl Abyss also spoke more about Crimson Desert. Listeners were told that PA planned on concentrating on single-player console games. For those who don't know, Crimson Desert is a planned single-player game with a multi-players option and not an MMORPG.  Two upcoming games, DokeV and Plan 8, are still on schedule to launch in 2022 and 2023, respectively.
The analysts on the call seemed particularly worried about Pearl Abyss' ability to publish its upcoming games as scheduled. Once again, an analyst asked about the timing of the launch of Crimson Desert. Pearl Abyss assured the analyst that the company was devoting all its resources to ensuring Crimson Desert launches in Q4 2021. But that assurance then brought a question about how the effort of launching Crimson Desert will affect the timed launches of other games in the pipeline. This concern by investors into PA launching games on-time will hopefully not result in games launching before fully ready.
Those are the highlights of the call as I saw them. Hopefully the information will come in handy as Pearl Abyss moves forward into 2021.
Posted by NoizyGamer at 6:00 AM