I managed to get 10 points yesterday by completing the Gala Gatecrashing challenge. 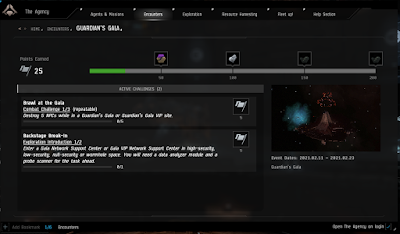 But the accomplishment came at a price. After spending the second day theory crafting how to improve my Claymore fit, I decided on day 3 to run a site in my Abyssal site running Vagabond instead. The little Minmatar HAC ran through everything like a hot knife through butter. Right up until the end when the Emcee Macharial landed on grid with an NPC Vindicator and four destroyers. I managed to take out the Vindicator and three destroyers. I even got the Macharial down to 1/4 shields. But alas, victory was not in the cards and my poor Vagabond went pop.

I went back to my home station, which was only one jump away, and hopped in my Claymore. The final boss went down fairly quickly with basically no support on the field. I also logged in my industrial character, put her in a Noctis, and looted the field. Overall, I picked up 16 million ISK in bounties and about 20 million in salvage and drops. Nowhere near close to compensating for the loss of my Vagabond.

What did I learn about the Gala sites? First, if you go into one, don't expect to run away. I managed to do that on day 1, but on day 3 I reached a point where so many points and scrams were on the field, it was win or die. I died.

Next, the NPCs really don't like drones. Maybe going into a site with a Rattlesnake is viable, but the NPCs prioritize drones.

Third, CCP does not want people to solo these sites. If I were to go into another site, I would do so either with other players or dual-boxing. I think I could clear a site using a auto-cannon fit Maelstrom combined with my Claymore providing boosts. However, I haven't dual-boxed missions in years. I might need to practice for the upcoming event The Hunt.

Fourth, high sec sites don't pay for crap. Forget about ship losses. The cost of ammo and lost drones would eat up a good portion of the profits. And that requires salvaging. Players going into the sites are looking for something besides an immediate payoff. A long term payoff might exist. I've only completed one site.

CCP did provide an exploration option. My plan for day 4 is to run at least one site. The "Backstage Break-In" challenge requires a data analyzer and a probe scanner. I have a ship or two that qualify. Hopefully I can report back with better news tomorrow.

Posted by NoizyGamer at 3:30 PM