On Friday evening in North America Square Enix presented a live stream discussing the upcoming 6.0 expansion. Titled Endwalker, the release is scheduled for sometime in the fall of 2021. The main story arc featuring the conflict between Zodiark and Hydaelyn begun in A Realm Reborn in 2013 will end by the end of 6.0. Patch 6.1 will introduce a new main story arc.

Before continuing I should add important news for console players. Players with a registered license for PS4 will be able to upgrade to the PS5 version free of cost. You didn't know that Square Enix had a PS5 version of FFXIV available? The open beta for the latest generation console begins on 13 April, the day Patch 5.5 goes live on the servers.

The initial trailer showed players that a trip to the moon is in their futures in Endwalker. Lunar content isn't new for the Final Fantasy franchise. Players travelled to an artificial moon in Final Fantasy IV. 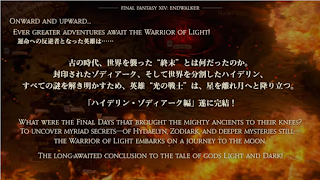 The new expansion will introduce two new jobs, one healer and one melee DPS. The trailer revealed one of those jobs, the Sage. The job will fill out the need for a fourth healing job to balance out the numbers of jobs for the other roles. The weapon Alphinaud uses in the trailer is called a nouliths. The Sage is a "barrier-type" healer, like the Scholar. In order to maintain symmetry, the Astrologian will be reworked to make the job a more pure healer like the White Mage. 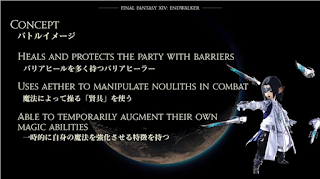 The requirements to play the Sage are to have one other job levelled to 70 and have purchased the Endwalker expansion. Square Enix will reveal the second new job at the digital fan festival in May.

The level cap in Endwalker will rise from 80 to 90. However, that requires a stats decrease. The numbers generated during combat already cause issues. 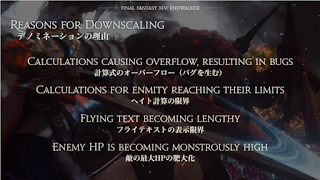 When the damage text causes rendering issues and Patch 5.5 had a boss with 440 million hit points, the developers probably need to do something to fix the situation. Basically, as many other MMORPGs have done over the years, the stats are getting squished. 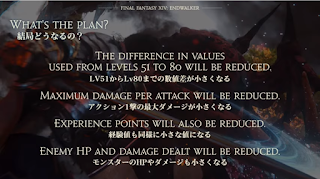 Theoretically, the relative power of players remains the same. As of now, though, players running old dungeons in undersized parties will have a harder go of things. The amount of damage for level 80 players is expected to be 80% less than today.

Two other subjects in the presentation interested me. The first is that the belt slot will no longer exist as of Endwalker. Any equipped items will automatically wind up with the Calamity Salvagers for safekeeping. That includes any belts equipped by retainers. Of the 35 belt slots in the Armory, 15 will go to primary weapons and 15 to rings, giving each of those sections 50 storage slots. The other 5 slots are not reallocated at this time.

The other area is housing. The new housing district in Ishgard will only open up to visitors with the launch of Endwalker. Players cannot purchase housing in the district until Patch 6.1. 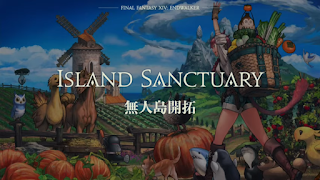 The new feature is called Island Sanctuary. The impression I was left with was that the islands were some sort of instanced content allowing players to grow plants and animals. Hopefully the developers will announce more details at the upcoming digital fan festival in May.

I haven't included items such as the 8-passenger Lunar Whale mount and the 3 minions available for purchase during the digital fan festival. Or the ability to travel between data centers, not just worlds on a data center. The latest producer's live letter is coming out as I finish this post and I'd like a change to look it over before commenting on some of the changes that are not that important to me. I might change my mind.