A Look At The July 2021 Monthly Economic Report

After a second quarter that featured the siege of the O-EIMK constellation in Delve, EVE Online witnessed a surge of activity as line members in null sec alliances returned to the game to participate in a climatic battle. In the second quarter of 2021 (April thru June), New Eden witnessed the least amount of damage since the introduction of Alpha clones in November 2016. Did activity pick up in July?

The first indicator of increased player engagement was the amount of the Active ISK Delta. The AID is the measure of how much ISK enters or leaves the economy due to players leaving or returning to the game. The AID also takes into account GM actions against rules breakers.

In June, the Active ISK Delta showed a net 67.8 trillion ISK leaving the game due to players not logging into their accounts for at least 30 days. In July, the figure fell to only 16.2 trillion ISK departing the game. A figure that low is an indicator players are returning to the game.

While the Active ISK Delta showed improvement, that doesn't necessarily translate to increased output for the economy. We need to know when players started coming back into the game. The money supply data typically shows that. 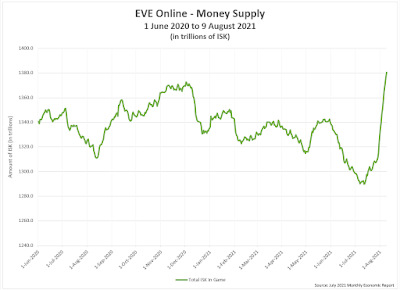 The data shows a dramatic increase in the money supply occurred beginning on 27 July. From 27 July until 9 August, the money supply rose by 5.6%. Notably, two events occurred. On 25 July PAPI alliances held townhall meetings telling their line members to prepare for a major attack on the Imperium's stronghold in Delve. Then on 27 July CCP launched The Grand Heist. One of the highlights of the event was a handout trickled out over 5 days of a maximum of 235 million ISK to players with Omega accounts.

With the knowledge that the event handout artificially increased the money supply, let's looks at some of the measurable activity. 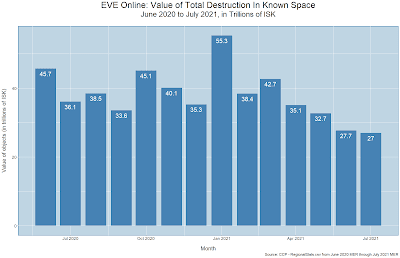 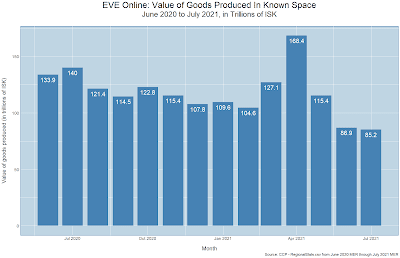 The value of production also declined in July, but only by 2%. The two percent decline was the same in both empire space and null sec. While some might claim the industry changes in April are the reason for the decline, the trend line for production has declined since the first month of the war. Year-over-year, production declined 39.1%. 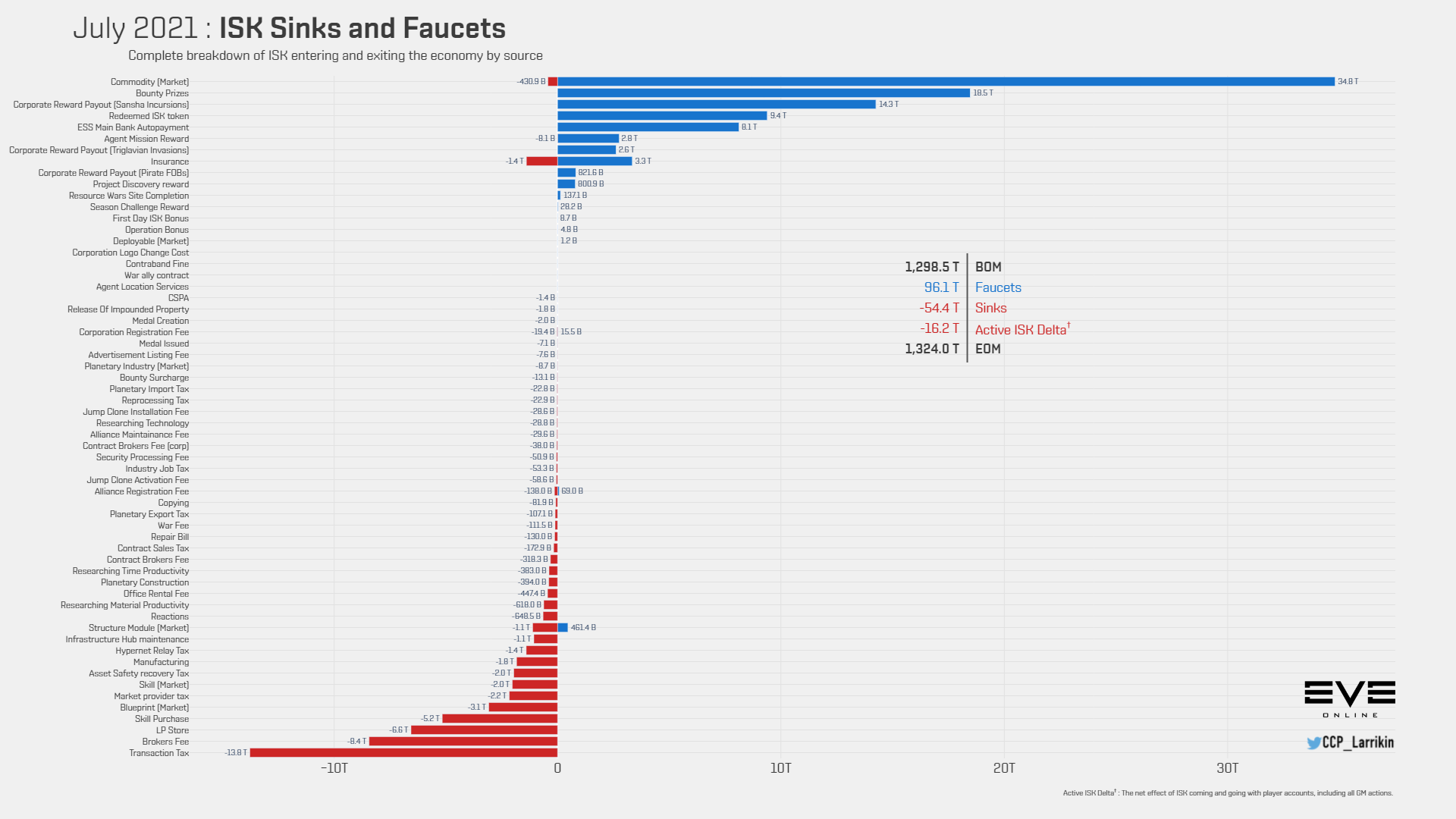 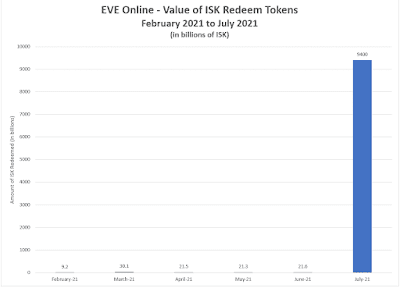 Added: The reason I believe the tokens are somehow related to the ESS banks is the introduction the reserve bank robbing mechanic with The Grand Heist on 27 July. As far as I can tell, the ISK Redeem Tokens category was added to the MER in February 2021. I guess we'll see when the August MER is released next month. 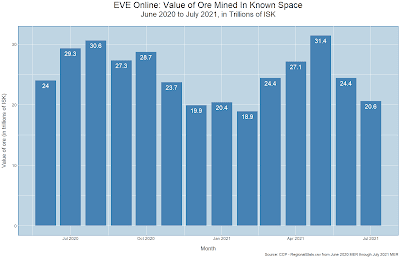 Added 20 August 2021: The tokens are not related to the ESS banks. They are related to The Grand Heist daily rewards. I've written a full explanation here.
The value of the ore mined in July declined 15.6% compared to June, which is the first indicator of a larger than normal drop in activity. According to the data, the mineral price index rose during July. Still, even with today's higher prices, the value of ore mined in July 2021 is 29.7% less than in July 2020. 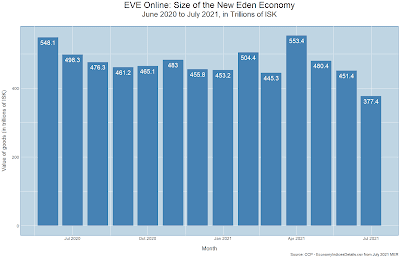 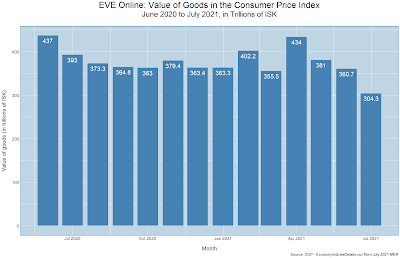 The value of the goods measured by the Consumer Price Index decreased the same percentage as the drop in the value of mined ore from June to July: 15.6%. Year-over-year, the value of the CPI decreased 22.6%. Compared to the month before the major null sec war began, the CPI value decreased 30.4%. 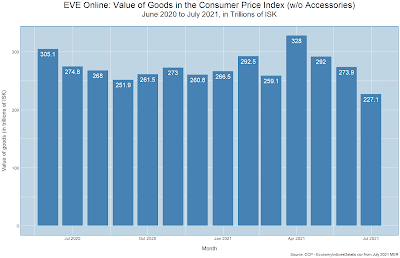 Since the analysis is making comparisons to the pre-skill point trading economy, looking at the CPI without the accessories category is in order. Without accounting for skill injectors and extractors and the other items, the value of the CPI declined by 17%, showing the RMT tokens were not responsible for the month-over-month decline.  However, the 17.4% year-over-year decline in the value is less than the 22.6% year-over-year decrease when the RMT tokens are included.
Removing the accessories category from the total economy reduces the value measured by all the indices to 300.2 trillion ISK. The last time the economy was smaller was back in December 2015 when the value was 299.1 trillion ISK.
When I began looking at the data, I thought I would like what I found. I thought the data would show a small decline in activity consistent with historical seasonal trends. But as I dug deeper into the files, a picture emerged of an EVE that is not performing well. Hopefully the end of the siege warfare in Delve will allow the economy to perform above the levels usually seen in August.
Posted by NoizyGamer at 4:00 PM