On Friday Square Enix announced the next in-game event in Final Fantasy XIV, The Rising. The event, running from 27 August to 9 September, celebrates the launch of A Realm Reborn on 27 August 2013. This year's event is rather sparse, with a reward of a parasol with a meteor symbol and special fireworks. I blame the COVID lockdown restrictions. 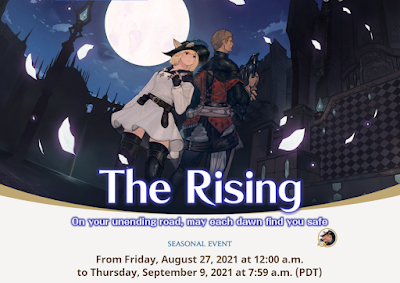 The Rising isn't notable for the in-game content. Instead, the fact that FFXIV even exists following the initial disastrous launch in September 2010 is remarkable.  With the Endwalker expansion three months away, the game will reach a new peak 8 years after the relaunch.

What game reaches a peak after 8 years? Maybe some of the sports franchise games if one doesn't count each year's edition as separate games. League of Legends experienced a large spurt of growth in 2017, eight years after launch. But in its genre, the only one I can think of is EVE Online, which debuted in 2003. After 8 years, EVE suffered a dip with the Summer of Rage in 2011, but came back to post a peak of 500,000 subscriptions in the first half of 2013.

World of Warcraft can boast about being much more popular after 8 years than FFXIV is currently. By the time Mists of Pandaria launched in 2012, though, the game's popularity was already on the decline. WoW peaked during Wrath of the Lich King with the decline beginning with the Cataclysm expansion in 2010.

I'll wind up doing the event quests like I do with all the seasonal events. I like the quests and want to see what the developers come up with to celebrate 8 years of FFXIV. But I'll also celebrate a remarkable achievement in the gaming world.