Yesterday, embattled president of Blizzard Entertainment J.Allen Brack stepped down hours ahead of Activision Blizzard's earnings call for Q2 2021. Brack, who had overseen the number of monthly active users decline from 35 million in the fourth quarter of 2018 down to 26 million MAU in the last quarter, was under fire for a recent lawsuit brought by California's Department of Fair Employment and Housing on 20 July. Following the public announcement of the lawsuit, Activision Blizzard stock fell 12.4% from 21 July to 3 August.

The company announced Brack would be replaced by two people, Jen Oneal and Mike Ybarra. Oneal was the head of Vicarious Visions from April 2016 until the studio was moved into Blizzard Entertainment in January of this year. Vicarious Visions most recently had worked on the remaster of Tony Hawk's Pro Skater and the soon to be released Diablo II: Resurrected.

Before moving to work on Blizzard Entertainment's Platform and Technology organizations in 2019, Ybarra had worked for Microsoft for 19 years, the last 10 of that associated with the Xbox. He also is a mythic raider in World of Warcraft, which may come in handy in getting fan acceptance.

One has to wonder how long Brack could have remained president of Blizzard Entertainment even if the California DFEH had not filed its sexual discrimination and harassment suit. Despite the launch of The Burning Crusade Classic on 1 June, the number of monthly active users fell from 27 million down to 26 million. Net revenue for the quarter year-over-year fell 6% despite double-digit year-over-year growth in World of Warcraft revenue. 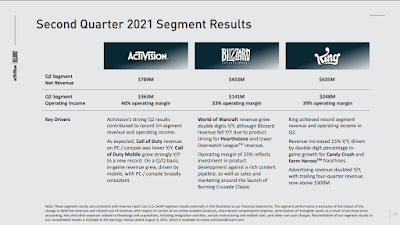 Blizzard Entertainment is not just World of Warcraft and other games provided disappointments. Hearthstone revenue was lower than predicted due to the latest expansion not launching until yesterday. Also, apparently Overwatch League revenue came in lower than expected in Q2 as well. 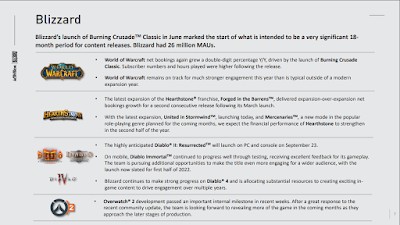 Despite all the words spent addressing the situation around the DFEH lawsuit, Brack's departure is more likely related to delivering products on time. The business plan requires delivering games on time. Both Oneal and Yberra have a long history of doing so. Blizzard Entertainment under J. Allen Brack? Not so much.
Posted by NoizyGamer at 1:15 PM