A Look At Dotlan Data For September 2021

September was the first full month after hostilities ceased in Delve and the forces from the coalition formerly known as PAPI withdrew in disorder. I think the smart set believes the September monthly economic report will show a strengthening economy. I'm not so sure, just because of seasonal effects. As I'm want to do, I visited Dotlan and downloaded the NPC kill and ship loss data to get a preview of what to expect when CCP publishes the MER later this month. 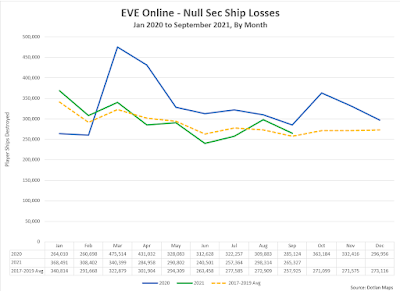 As expected, the number of player-owned ships exploding each day fell 8.1% from August to September as the amount of player vs player combat returned to normal. But historically ship losses in null sec decline from August to September. In the period from 2017 to 2019, the average decline was 5.5%. Overall, null sec experienced 2.9% more ship losses in September 2021 compared to the average for September from 2017 to 2019. 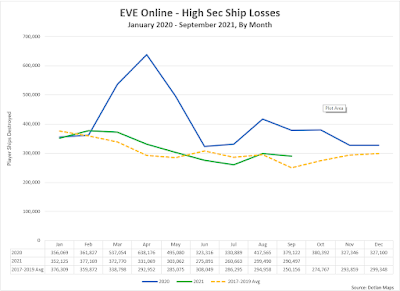 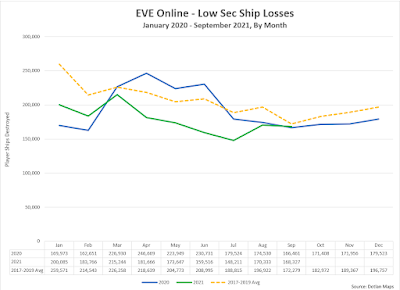 The same phenomenon experienced in high sec also occurred in low security space. The graph shows a decline in ships players lost in September, but when the losses are averaged per day, ship losses actually rose by 2.1%. But unlike high sec, the figure fell short of the 2017-2019 average by 2.3%. 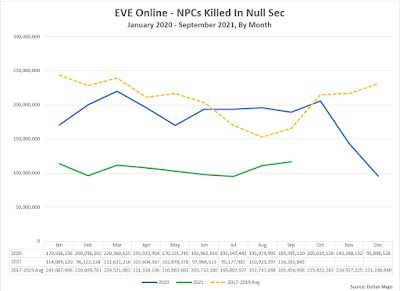 Perhaps the biggest news is the number of NPCs players killed in null sec in September. The daily average rose 8.4% from August to September. Since July, the daily average of NPCs players killed in null sec rose by 26.4%. The end of the war had an impact, but not as much as one might believe. The average number of NPCs destroyed from 2017 to 2019 increased from August to September by 11.9%. The increase in 2021 was below the seasonal average. To make a discussion of ratting in null sec even more interesting, the number of NPCs killed was 29.7% less than the three year average for September from 2017-2019. In the case of null sec ratting, people can take the data and use it to justify multiple positions. 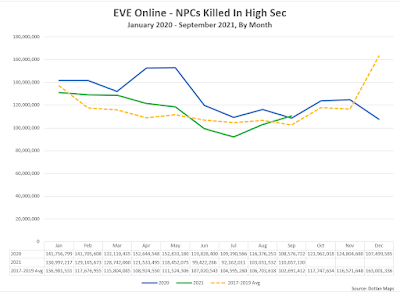 The situation in high sec, in comparison, is in better shape. The number of NPCs killed in September was 7.8% higher than the average in 2017-2019. The 11% increase in NPCs killed from August to September ran directly against the slight negative trend established from 2017 to 2019. 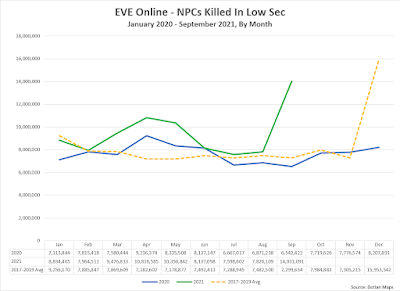 Finally, the number of NPCs killed daily in low sec increased 85.3% from August to September. The increase is most likely associated with the Researching the Rogues event running from 23 September to downtime today.
Overall I think the PvP situation is back to normal in EVE Online. PvE, on the other hand, is still suffering from the scarcity era. But the Dotlan data only provides information about ship hulls, whether player or NPC. The upcoming monthly economic report will put game world financial information to those numbers. As of the time of publication of this post, I expect a slight increase in the numbers in the September MER.
Posted by NoizyGamer at 12:00 PM