Yesterday CCP published the monthly economic report for September. On the plus side, the MER came out two weeks earlier than normal. The only problem is Period Basis is missing from the RegionalStats.csv file. I rely on that file for a lot of the graphs I run. I couldn't really start running my scripts last night. I'm still hoping CCP releases an updated version.

The missing region gave me an opportunity to look at data I've neglected up until now. That's right, the MER has a file containing ship kills named kill_dump.csv. So today, I'll look at the ships players most frequently kill. 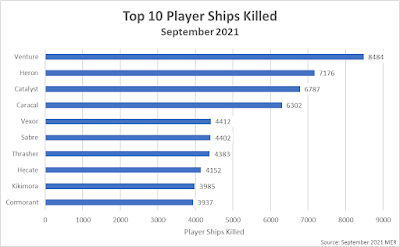 Looking at the top 10 list of ships, my first thought was, "Are we playing Destroyers Online?" Half the ships on the list are destroyers, while a sixth is a tactical destroyer. I personally don't like destroyers, but after seeing the list, I'd advise new players to aim for training into a destroyer if they wish to PvP.

The top of the list is headed by two non-combat ships popular with both new and Alpha players. The Venture is the first ship players can fly that specializes in mining. The Heron is the best tech 1 frigate to use for running data and relic sites until a player can afford to fly the Astero.

The final two ships are the Vexor, a tech 1 Gallente cruiser with drone bonuses and the Sabre, the premier interdictor in EVE. 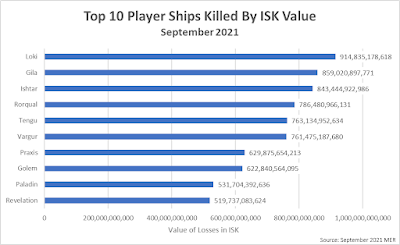 When discussing destruction, the MER usually references ISK values, not ship hulls. At the top of the list is the Loki. A tech 3 strategic cruiser, 914.8 billion ISK worth of the ships died in September. Another T3C, the Tengu, came in at number 5 on the list.

The next two ships are drone boats. The Gila is a Gurista faction cruiser with a massive bonus to medium combat drones that is a go-to ship for events and Abyssal sites. The Ishtar is the tech 2 version of the Vexor listed as the number 5 ship on the first list. The ship as a role bonus of fitting Assault Damage Controls, making the ship more survivable in combat.

The number 4 ship was the Rorqual. With 786.5 billion ISK destroyed, the ship draws combat to it.

The six through nine slots are filled with battleship hulls. The Vargur (6), Golem (7), and Paladin (9) are Marauders, the tech 2 version of battleships and used for running PvE content. Coming in at number 8 is the Praxis, the Society of Conscious Thought battleship that is given away for free by CCP at special events. I'm honestly surprised so many Praxis are still flying around.

The final ship on the list is the Revelation. I wonder if the ability to participate in structure bashes without needing to expend ammunition puts the ship in harm's way more than other dreadnoughts. 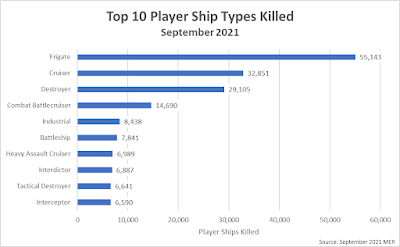 Looking at the ship hulls killed by ship type, I didn't see very much unexpected. The top six positions are filled with tech 1 ships while the bottom four consist of tech 2 and tech 3 ships. I was a little surprised that battleships ranked as high as sixth until I saw that 37% of the battleships killed were Praxis. Players don't need to worry about April's industry changes if the ships are already pre-built by CCP. 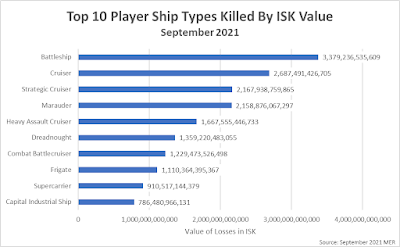 The cruiser came in second place based on the number of Gilas players lost. The 859 billion ISK worth of the ships made up 32% of cruiser losses.

I expected to see Heavy Assault Cruisers on the list. What I didn't expect to see was the domination of the Ishtar on the list of HACs. The Ishtar made up 50.6% of the value of all HAC losses.

The final category I want to comment on are the frigates. Yes, the value of frigates that died exceeded that of supercarriers. But the top two ships in value lost were the Astero (361.3 billion ISK) and the Heron (112.2 billion ISK). Those two ships made up 42.6% of the value of all frigates lost in September.

Reviewing the monthly economic report is a habit at this point and sometimes gets old and feels stale. Looking at different types of data is fun, especially since I haven't looked at data like this since the days of the Quarterly Economic Reports when Dr. Eyjo was still as CCP. Hopefully looking at the ship loss data in the MER will do enough until CCP can rerun the data to include Period Basis.

Posted by NoizyGamer at 1:00 PM