After spending last week looking at EVE Online data and trying to decipher the new network framework, I needed to take a break from serious spaceship business. The solution was diving into the world of music in Final Fantasy XIV.

On Saturday, I hit level 30 as an archer. Completing the initial bard quest and talking to an NPC in Gridania unlocked performance mode. I was surprised at how much unlocked. I expected to have to grind levels to unlock the various instruments. Instead, all the instruments became available at level 30. I should note the developers did not provide different models for all the instruments. For example, the violin and cello have the same instrument, just different notes. But I was happy.

The performance user interface is pretty simple. The basic keys are QUERTY, with the shift key making the notes one octave higher and the control key one octave lower.  Pretty simple, although I might want to change keybinds later on. But I found the sheet music for "Mary Had A Little Lamb" and managed to play an acceptable version of the song fairly quickly.

Next, I went online looking for sheet music for Final Fantasy music. Turns out the sub-Reddit for FFXIV has a list of songs with the notes to play. I managed to play a bad version of the Kugane Theme on the violin. While I need practice, I did manage to hit all the notes in order, if not with the correct length.

I'm not sure which is taken more seriously in MMORPGs, EVE's internet spaceships or FFXIV's club and roleplaying scene. Given that I think EVE players were hoping for a serious business club scene when Incarna released in 2011, I have to give the nod to FFXIV. Especially after visiting The Rose Hall. 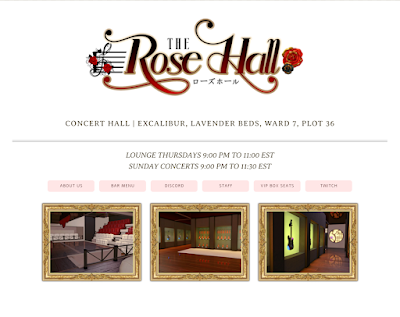 On Friday, someone in FC chat mentioned that a club called The Rose Hall over on Excalibur, a world on the Primal data center. In addition to the standard Twitter account, the venue has a Twitch page and even a Discord server which they use to conduct giveaways. For role players, they have a full alcohol bar with snacks. For the high rollers, VIP box seats are on off to the sides of the stage. We're talking 1 million gil for a party of up to six as well as a personal bartender, free bottle service and unlimited food and drink for your party for an additional 500,000 gil. For a comparison, I make between 750,000 and 1.5 million gil per week. I guess I'm almost wealthy enough to be a high end role player!

In addition to all the above, I found out The Songbirds were playing the venue on Sunday. The original Songbirds group was a girl band introduced with the Little Ladies' Day event in 2016. As such, some of the emotes and clothing is purchasable from the Mog Station.

The player group founded in 2018 is a little bigger than the original 3 member NPC girl group. Of course, since music is serious business, The Songbirds have the full array of social media accounts, including Twitter, Twitch, Instagram, and the ever present Discord server. I already was a follower of the Twich channel and wanted to see the group play in person. When I mentioned in FC chat the Songbirds were playing at The Rose Hall, a couple of people were interested. A few of us wandered over to the venue for the show.

I wish I had taken screenshots of the bar. The entrances to the stage and seating area is on each side of the bar. I ran around a bit and for a minute I got the feeling I had when peeking into some of the presentations at Fanfest in Harpa. In other words, a very immersive experience.

I spent most of the first set to the left of the stage until I spotted Rain on the other side. I ran around to where he was for the last few songs before intermission. Yes, they had an intermission. The Songbirds wound up playing I think 2 1/2 hours including the intermission. I saw a couple of the group members at the bar engaging with the bartenders. I'm assuming free drinks were part of the contract for playing.

I haven't mentioned the music yet. The music last night was all video game music. With franchises like Final Fantasy, Kingdom Hears, and Nier, bards in Final Fantasy XIV have a lot of music they can play from Square Enix games. A good thing too, because technically players are not supposed to play music from outside the game. I haven't looked into the matter, but I'm assuming all Square Enix music is fair game for FFXIV's bards since the company presumably has the copyrights to the tunes. The Songbirds did sneak in a couple of Guild Wars 2 songs plus a special dedication for all the WoW refugees in the crowd.

Overall, I enjoyed my visit to The Rose Hall. The venue was great even if I'm not really a role player and didn't partake of the refreshments. Seeing the Songbirds up close is a lot different than watching them on Twitch. I'm also glad I got to experience some of the mechanics behind the music before I went to the show. I fully intend on following up on the music scene whenever I need a break from other game play. I just need to up my glamour game, as clubbing in FFXIV is serious business.

Posted by NoizyGamer at 1:00 PM