I watch a lot of YouTube videos about video games. One that caught my attention was one by Josh Strife Hayes reviewing reasons why people stop playing MMORPGs. One of those reasons is players not able to install the game without problems or going through a complicated process. CCP removed one of those types of speedbumps in today's patch with a new fully native Mac client.

Reading the patch notes, the transition from Wine to the native Mac client should be fairly painless. But the new Mac client is still not perfect. Besides needing to rebind some keys, I saw two other things of note:

I'm not sure if the client automatically throttling framerates if the video card starts getting too hot is considered a negative by some people. I'd think it a positive, but I'm not a Mac user. 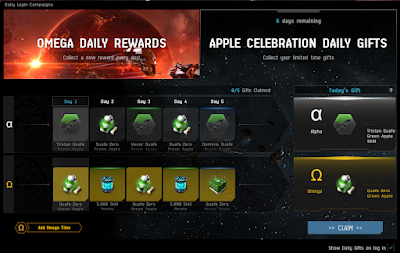 Accompanying the new client is a new login event with some attractive rewards. In addition to new SKINs for the Tristan, Vexor, and Dominix, a new booster is available. 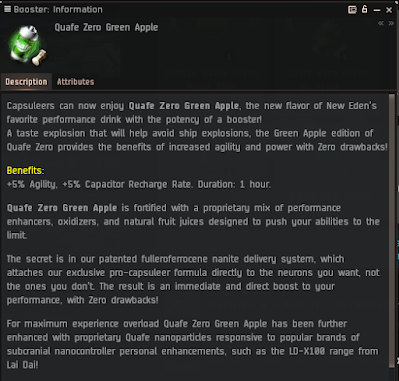 The original Quafe Zero gives a +5% speed and +5% scan resolution buff. The new Quafe Zero Green Apple gives a +5% agility and +5% capacitor recharge rate. On the downside, the booster is automatically applied when redeemed. Yes, I understand that people would game the system and create hundreds, if not thousands, of new accounts in order to obtain Quafe Zero Green Apple if the item was not apply on acquire. But I really would like to have some in storage for a special occasion.

On the upside, Alpha accounts get two of the boosters while Omega accounts get between 7 and 9 if they redeem the rewards all five days. The 10,000 skill points for Omega players is nice, especially for newer players.

I did find the item description amusing. I didn't show it in the above graphic, but there is extremely fine print at the bottom of the text box. Curious, I managed to track down the text from the Quafe Zero description. I'm pretty sure the description applies to the new booster as well:

Quafe Zero is a product of the Quafe Company. Quafe does not condone the use of boosters or other illicit substances. The Quafe Company disavows responsibility for any side effects caused by consuming Sleeper technology.

Warning: Quafe Zero is designed for capsuleer use only. Side effects experienced by non-capsuleers include but are not limited to dizziness, blindness, nausea, internal hemorrhaging, IBS, sleepwalking, amnesia, sexual deviancy, vision changes, acute epidermal sloughing, partial or total loss of motor control, and minor skin rash.

Overall, I'm glad to see CCP continuing to upgrade EVE's technology, whether the change is to the client or Tranquility's network layer. Hopefully, by removing a road bump to playing the game, EVE might pick up a few more players to sustain the game's population.