Last night at the beginning of the presentation of Live Letter 67, an emotional Naoki Yoshida, producer and director of Final Fantasy XIV, announced the delay of the Endwalker expansion. His announcement was also posted to The Lodestone.

There are several reasons for the postponement, but as I’m the one overseeing all aspects of the title as the head of the project, the responsibility falls solely on me. Allow me to convey my sincerest apologies to our players, our Warriors of Light around the world who have been looking so forward to the release of Endwalker. I am truly sorry.

Usually when a company makes an announcement like the one Yoshi-P delivered, it is usually very general and the person in charge doesn't make the statement live. Last night Yoshida explained his personal culpability.

However, as we neared the end of development and I played through everything—from quests to battle content and the like—I just couldn’t contain my desire to further improve Endwalker’s quality, specifically because this expansion pack marks the first major culmination of events in FFXIV so far. Even as we look beyond Endwalker, the FFXIV story will continue for a long time and we hope to deliver many more enjoyable experiences in the game. However, it was precisely because Endwalker concludes the first major saga that I felt our team needed to push ourselves to the “limits” that I envisioned.

As a result, we remained firmly resolved to adjust down to the smallest nuances and ensure our writing covers even the finest points of the vast and intricate story that has spanned these past 11 years since the original FFXIV to ensure that everyone can fully enjoy their adventure in Endwalker. Unfortunately, the consequence of this was that we ended up in a situation where we cut into the time required for final quality assurance checks due to this time spent on additional improvements.

At this rate, there was a bigger risk of us reaching the release date without ensuring “stability” as one form of quality, and for that reason, I have decided to postpone the release at this time. As we also anticipate large amounts of congestion across all game Worlds, I felt that even in this respect it wouldn’t be right for us to release the expansion while lacking adequate “stability.” I am truly sorry.

I watched the stream live while logged in chatting to my FC mates. The reaction ranged from people saying Yoshida had nothing to apologize for to others who were crying watching him. And the support for Yoshida grew as he ended his statement.

Once more I would like to convey my sincerest apologies for the inconvenience caused to our players and colleagues due to my own shortcomings. I sincerely apologize for this decision.

We will continue to do our utmost to bring you the best experience not only in Endwalker but also through further updates and content that will follow, restoring your trust one step at a time.

The new key dates for the expansion now are:

Patch 6.01, I learned, is the release of Endwalker's raid series Pandaemonium, with the savage versions becoming available with patch 6.05.
Unfortunately, I now have to address business, particularly competition with World of Warcraft. Blizzard Entertainment dropped patch 9.1.5 on Tuesday bringing many changes to a game that experiencing a significant drain of players to FFXIV. One of the items of patch 9.1.5 I saw some of the content creators wonder was why the five week delay between the start of the patch and the beginning of the Legion Timewalking event, running from 7 December to 20 December?
Some thought the start of the event was no coincidence. If Square Enix had launched on time, the Legion Timewalking event would have launched the same day as the launch of the first tier of Pandaemonium.
Honestly, I think that Blizzard is chasing monthly active users (MAU). Launch the patch at the beginning of November and then Legion Timewalking & The Mage Tower the beginning of December to keep the numbers up. If that also stepped on the hype for FFXIV's first expansion raid tier, I'm sure no one in Irvine would shed a tier.
Now though, the shoe is on the other foot. The launch of Endwalker now falls on the launch of the Legion Timewalking event. I imagine the expected MAU's Blizzard leadership is hoping for will not meet the target.
I want to make one final point. I don't believe Yoshida moved the release of Endwalker to step on Blizzard's schedule. The man wears his emotions on his sleeve and he clearly did not want to delay the expansion's launch. If anything, I think the man just needs a hug. 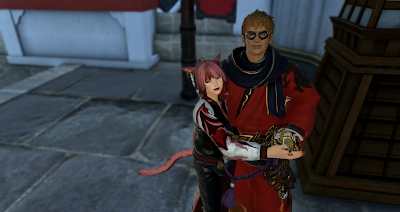 Posted by NoizyGamer at 3:12 PM