The October 2021 Monthly Economic Report: The Velocity Of ISK

With the recent debut of the fourth quadrant of 2021, New Dawn: The Age Of Prosperity, many players believed that the Scarcity Era in EVE Online would end in December. The quadrant announcement stated that CCP would shift to the next phase of its grand plan to fix the EVE economy, the Redistribution Phase:

In this phase, the location of the Healthy Range limits will be declared, and then the necessary changes to place the income within that range will be made. As it is not a static state, there are many moving parts and attributes that establish this range and their relative contribution.

Unfortunately, one of those metrics, ISK velocity, is about to drop even lower. In the latest Pulse video, CCP included a brief blurb about the October 2021 Monthly Economic Report (MER):

While the Mineral Price Index drops, the performance of the mining sector continues to be strong. Mining volume is the higest seen since July 2019. Acquisition of commodities, especially Sleeper components, has steadied but remains high, remaining at a similar level to bounty prizes.

The recent increase in the transaction tax has seen a tripling of the primary ISK sink, and analysis suggest this will slow ISK velocity in the coming months. [emphasis mine]

What is ISK velocity and why should anyone care? The velocity of ISK is a measurement of the rate at which money is exchanged between players in New Eden. In a real world economy, the velocity of money is calculated by dividing a country's gross national product by the total money supply. EVE Online, being a video game, is a bit different. In EVE, the velocity of ISK is the amount of sales over the past 30 days (found in the IskVolume.csv file) divided by the average amount of ISK in the money supply over the past 30 days (found in the MoneySupply.csv file).

I won't go into the details of the MER, because the calculations using the data in the MER files does not match up with the Velocity of ISK graph. The trend, however, is the same. 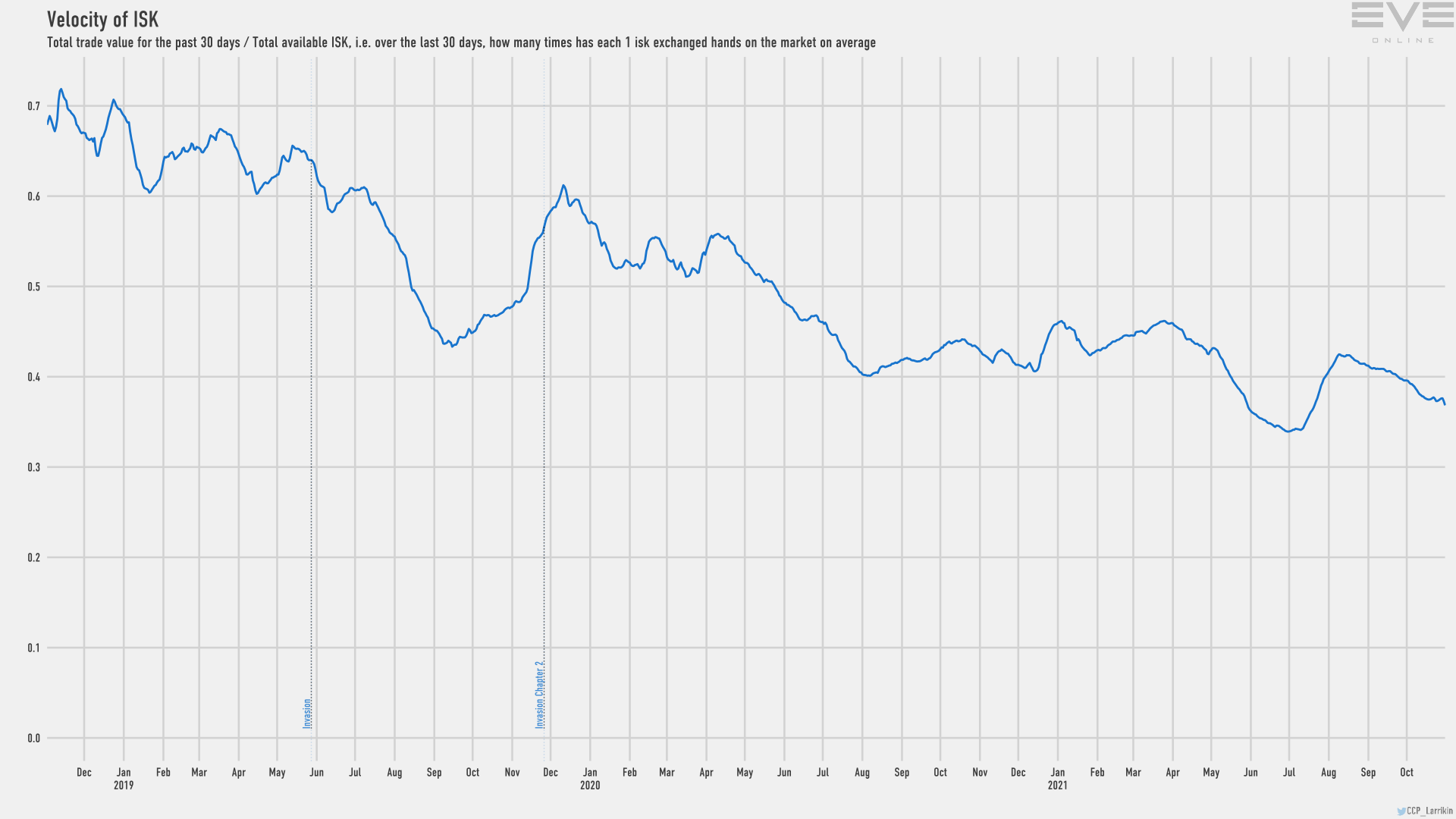 Since 2019, the ISK velocity has steadily trended downwards. Why is the downward trend a concern? Investopedia has an explanation.

The velocity of money is important for measuring the rate at which money in circulation is being used for purchasing goods and services. It is used to help economists and investors gauge the health and vitality of an economy. High money velocity is usually associated with a healthy, expanding economy. Low money velocity is usually associated with recessions and contractions...

In a video game, an additional factor is players leaving the game and basically deleting their wealth from the game world when they log off for the last time. Over time, in a declining game like EVE, players leaving is the largest long-term money sink in the game. If everything works, if both the money supply and economic activity stays proportional to the size of the player base, then the velocity of money within a game's economy should remain the same. But according to the graph in the October MER, the ISK velocity in New Eden has trended down since late 2018.

Another factor that separates EVE from real world economies is the influence of the game company itself. Some game companies chase after metrics like monthly active users (MAU). One way to do that is offer events to attract players to play the game at least once a month. With the way the money supply is determined by CCP, as long as the account logs in once every thirty days, the ISK on that account is not considered to have left the game. Instead of being a measure of economic activity, the velocity of ISK can become a measure of player engagement. Sure, the MAU and DAU (daily active user) counts may be high, but are players actually playing the game? Or is a large percentage of the user base simply logging in for the latest login reward?

For now, though, CCP in my opinion committed a messaging blunder, giving the sub-title for the fourth Quadrant, "The Age of Prosperity". Although the "From Extraction to Production" dev blog did not promise greater individual wealth, many players believed brighter days were just around the corner. But with a prognostication of the ISK velocity continuing to decline over the coming months, don't expect such results anytime soon.