When CCP Falls Too In Love With An Idea

Sometimes CCP falls in love with an idea even if the players show how much they hate the feature. The latest example is the use of tier 1 processed materials (P1) from planetary interaction in capital and super-capital ship construction. Players hate transporting the materials around due to the tremendous bulk of water. 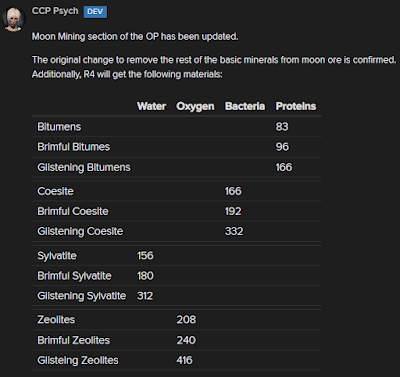 CCP is replacing basic ores in R4 moons with P1 planetary interaction material. I think I see why. By removing the basic ore, players are less likely to care about mining R4 moons. Thus, to replace the basic ore, the developers decided to use the P1 materials required for construction of EVE Online's big ships. Simple, right?

Still, one of the reasons players initially looked forward to the current quadrant was the ability to compress moon ore for easier shipment. Easier logistics is a common theme for player wishes. Let players compress ore in order to move minerals around easier. Remove, or at least significantly reduce, the requirement for P1 materials in manufacturing to reduce the number of freighters required to move materials around. Instead, CCP is adding a non-compressible material to R4 moons that players already hate moving around. Does this really make sense, or am I missing something?