CCP's War On Bots: Another One Bites The Dust

Yesterday one of the major gold selling sites that I identified Monday as experiencing supply problems, Koala Credits, took Eve Online off of the list of games in which it sells virtual currency.

The virtual currency seller apparently began to experience issues obtaining ISK at the end of October.  Many companies began raising prices around this time as CCP's Team Security began a crackdown on illicit RMT operations in New Eden.  But of the ISK selling sites listed on MMOBUX Koala Credits raised prices the most, a whopping 27.9% 38.7% over the course of three weeks. 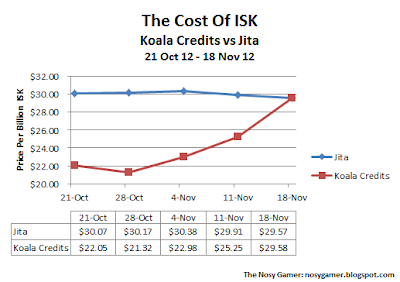 At the end, Koala Credits was selling ISK at the same price a player could get by purchasing two PLEX from CCP and selling the PLEX in Jita.  If a company cannot provide a significant discount to compensate for the risk involved in a player purchasing game currency from a third party site, the site will eventually lose money.  Koala Credits apparently cut its losses and will concentrate on the 33 games in which it still conducts business.

Koala Credits is a rather new virtual currency company based out of Hong Kong that is the #1 rated web site on MMOBUX for customer satisfaction.  Koala Credits is also the second major virtual currency company to stop selling ISK this month.  Sometime between 4 November and 11 November the Canadian website InGameDelivery also got out of the ISK selling business.  InGameDelivery is currently the #2 ranked web site on MMOBUX based on customer satisfaction.  Both sites are still in business, just not selling ISK.

Added 7 December 2012 -  With the launch of the Retribution expansion Koala Credits returned to the ISK selling business.  They began listing ISK sometime between 3-6 December.
Posted by NoizyGamer at 6:00 AM