Inferno: A Look At The Numbers

With CCP ramping up the excitement for Retribution with a spate of dev blogs the time has come to look at how Inferno did at drawing people into actually logging in and playing Eve Online.  Taking the weekly averages from Eve-Offline.net led to a graph that looks a bit unusual. 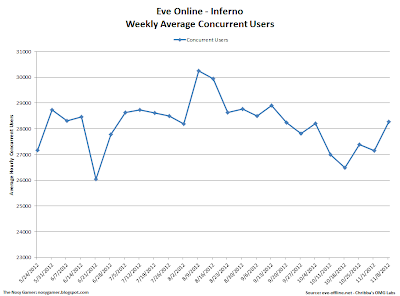 One item that sticks out is that despite the controversy over the Unified Inventory that the average number of players on Tranquility rose by 1,500 - 2,000 per hour until the middle of September except for a dip in the middle of June.  The big spike over 30,000 users per hour occurred right before the release of the Inferno 1.2 patch.  But then following the release of Inferno 1.2 the number of users declined by 11.5% until the ramp-up to Retribution began.

Did the traditional summer/autumn decline cause the player activity observed?  I took the seasonal data from 2007-2011 I gathered earlier this year and compared the data to this year's results. 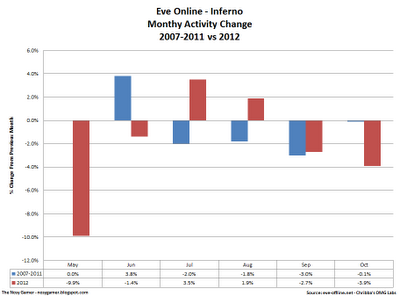 The numbers for May stand out because Eve saw almost 10% less players on Tranquility in May compared to April when May is usually a very stable month.  Was that the outrage over the Unified Inventory?  No.  Diablo III came out on 15 May and the run-up to the launch of the Blizzard game led to a loss of players in all games.  I believe that the rises in both July and August were caused by players returning to the game from playing Diablo III.

However, I do believe that part of the rise in players at the beginning of August was due to the deployment of Inferno 1.2 and the ship changes.  But that did not last very long as logins steadily declined until the middle of October.

The last mystery is why the decline in September and October.  The 2.7% decline in September is close to the 3% average decline experienced from 2007-2011.  But what about October?  While pointing to DUST 514 as the cause is tempting, Eve-Offline shows that the concurrency numbers on Singularity did not top 200 over the past few months.  A more likely explanation is the price of PLEX.  On 1 September the price of a PLEX in The Forge averaged 498,999,998 ISK.  By 10 October the price of PLEX had risen 29.7% up to an average of 647,101,002 ISK.  While that price is good for the fight against the illicit ISK trade, I believe a lot of players who funded their subscriptions using Eve's in-game currency found themselves unable to pay for subscriptions to some if not all of their accounts.  With the prices Tuesday down 9% from the all time high we may see the concurrency numbers rise, but possibly not back to the August numbers before the launch of Retribution.

So was Inferno a strong expansion?  One could argue that in the face of the Diablo III juggernaut that Eve saw growth once Inferno launched.  But Eve saw a decline as inflation in the PLEX market took its toll on players paying for their accounts in ISK.  I think history will show Inferno as a middle-of-the-road expansion, at least in terms of player interest as the concurrency numbers likely will be higher at the launch of Retribution than they were at the launch of the spring 2012 expansion.
Posted by NoizyGamer at 6:00 AM