When word leaked out from Eve Skunk that Against ALL Authorities fleet commander Lee Chanka cancelled a call to arms due to CCP banning 20 -A- logistics accounts one couldn't help but wonder if the Eve mail was just a troll.  A look at the price on illicit ISK in Eve Online since that email on 31 October strongly suggests that has taken action against at least one major RMT operation in New Eden and perhaps more. 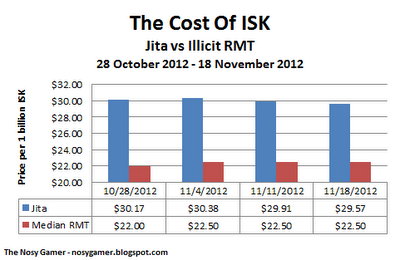 At first glance the price appears to have not increased very much.  Using the list of companies listed on MMOBUX as a guide, the median price of 1 billion ISK only rose from $22.00 to $22.50, an increase easily attributable to increased demand as the winter expansion Retribution approaches. The 2.2% increase in the cost of illicit ISK corresponded with a 2% decrease in the real-world decrease in the cost of ISK when buying PLEX through CCP and then converting the PLEX to ISK in the Jita market.  But a closer look shows that some companies are having difficulty acquiring new product. 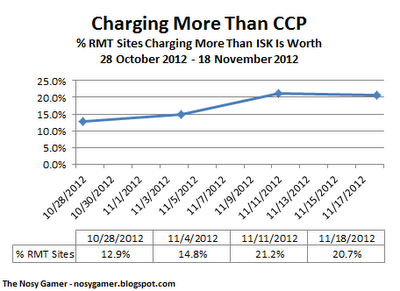 Fully 1 in 5 websites listed on MMOBUX were selling ISK at a higher price that someone could purchase the same amount by just purchasing 2 PLEX from CCP and selling the PLEX in Jita.  Three weeks ago that number was 1 in 8.  One of the big selling points of purchasing virtual currency via a third party site is obtaining a cost savings.  How can an RMT company stay in business if they charge more than the game company?  That could explain why two of the four websites selling ISK at above market rates on 28 October are no longer online.

Looking at the 26 websites listed on MMOBUX on 28 October that are still listed today, nine of the companies raised their prices an average of 15.7%.  Two of the larger companies in the virtual gold selling industry, Avatar Bank and Koala Credits, were hit especially hard.  Koala Credits raised its prices 7.8% in the days following the leak of Lee Chanka's Eve mail.  Avatar Bank apparently was hit a few days later with a major disruption in supply as the company had raised its rates by 18.5% by 11 November.  Apparently another suppy disruption occurred within the last few days because both websites raised their rates to over $29 per 1 billion ISK yesterday.  Over the last three weeks Koala Credits have raised prices 27.9% and Avatar Bank by 21.1%.

One of CCP Sreegs' stated objectives is to make operating in Eve financially unattractive to botters and ISK sellers.  This latest offensive against illicit RMT operations succeeded in that regard as one web site, InGameDelivery, no longer sells ISK.  That move came sometime between 4 November and 11 November.  One of the interesting facts I discovered while investigating this story is that InGameDelivery is associated with Avatar Bank.  Apparently when Avatar Bank found ISK in short supply the decision was made to cut off InGameDelivery.

During my time playing Eve Online I have often heard the phrase "winter is coming" when discussing when war would begin in null sec.  For those whom CCP Stillman and CCP Sreegs warned about turning their alliances into RMT operations, winter is apparently here.
Posted by NoizyGamer at 6:00 AM