For anyone interested in CCP's War on Bots and illicit RMT, following CCP Stillman's Twitter account is mandatory.  He tweets the most interesting things.  Three interesting things occurred.  First, Team Security made an unannounced visit to Jita.  Second, a pilot with -10 security standings was not only flying around Jita in a ship, but he was cloaked.  And third, local grew quiet. 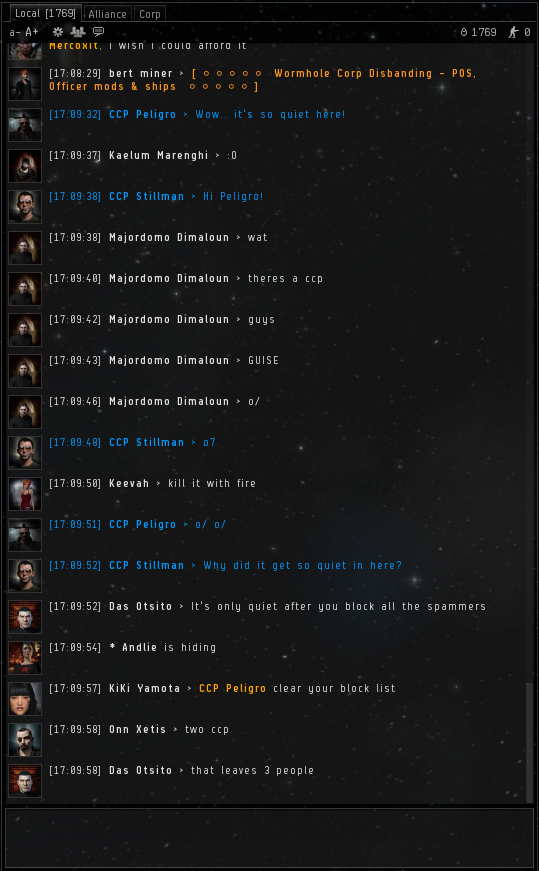 That's right, Team Security brought the banhammer down on the spam bots in Jita.  Needless to say, many people were happy.  Long-time anti-spambot activist Chribba was particularly happy.


Within hours TheMittani.com published an article about the event.  But CCP Stillman was cautious, not committing to writing a dev blog about Tuesday's actions until he could evaluate the measures to ensure they were successful in the long run.  No premature declarations of victory would come from Rejkjavik.  The battle between CCP and botters is a game of cat and mouse.  Team Security had struck a powerful blow, but will the botters stay down for the count?

History tells us that botters always try to come back and that the hardcore botters, especially those involved in selling illicit ISK, are particularly hard to purge from a game.  But players without that type of motivation are a little easier to convince to change their ways.  Looking at the top 10 messages injected into Jita local indicates a possibility that the top spambots were looking to move PLEX. 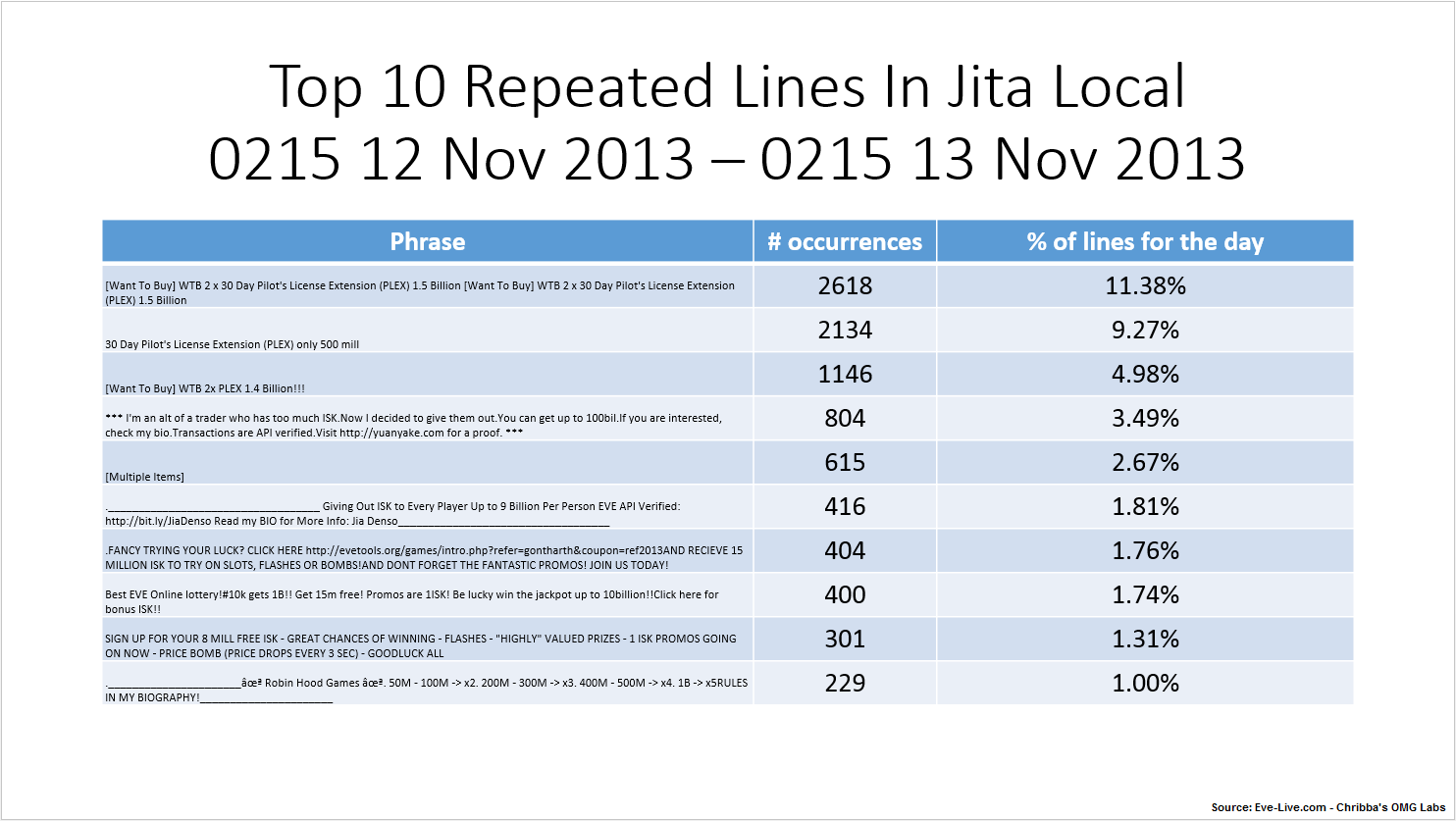 The top three lines all refer to PLEX, with the first and third most injected lines looking to purchase 2 PLEX for 1.4 billion ISK and 1.5 billion ISK respectively.  Scam or ISK laundering operation?  One could definitely make the case for scams.  After all, just short one zero in the contract price and the scammers walk away with between 900 million and 1 billion ISK profit.  So let's look at the date of the characters.

Looking at Sura Ba and James Deek, what are the odds that these characters are owned by the same person?  I would think pretty good.  So what should one think of one player who is buying PLEX at 750 million ISK and selling PLEX at 500 million ISK?  At the least, something very interesting was occurring.  Also, some of the spam bots may have a pretty good reason to try to defeat CCP's anti-spambot measures. 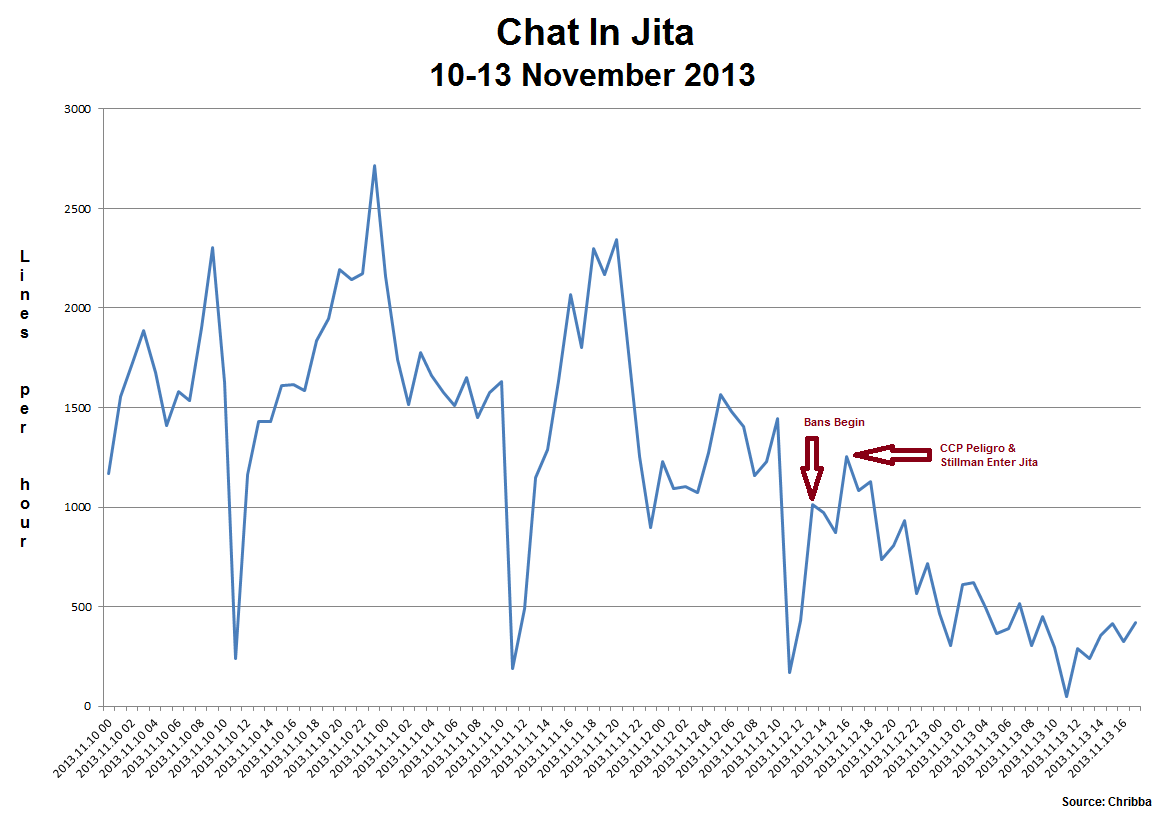 But most players are not interested in any possible disruption of the RMT trade.  They're elated that the spambots are quiet, or at least not so annoying.  Looking at the graph above that was provided by Chribba, the amount of chat in Jita local after downtime was significantly reduced compared to the preceding days. 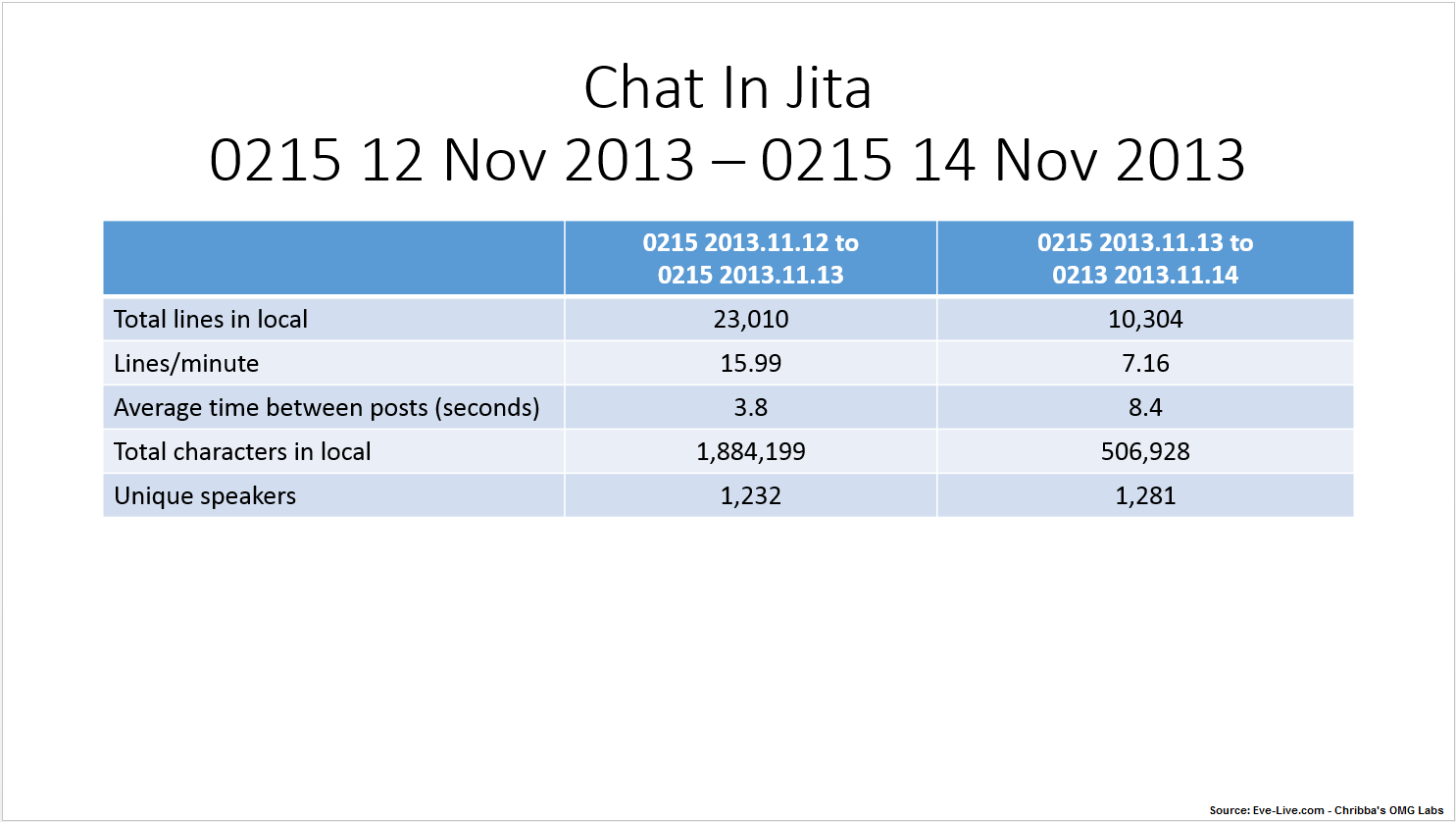 The above numbers seem to indicate that the spambots were suppressed, at least for one day.  Not only did the number of lines in Jita local decline by 55.2% but the number of characters typed into local declined by 73.1%.  So not only did the spambots degrade the quality of Jita local by spamming lines, but made the lines scroll by much faster with the length of each line as well. 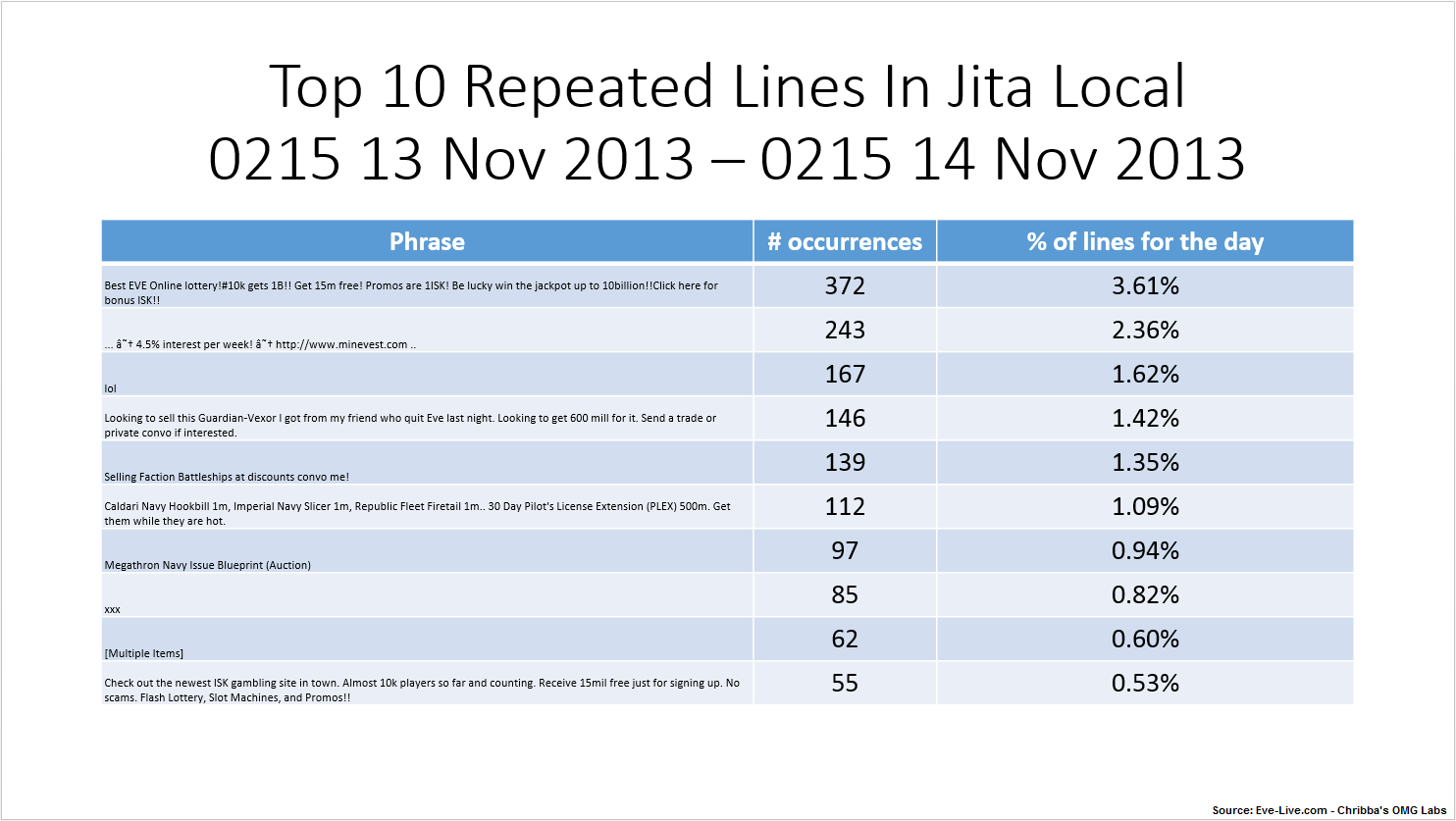 "Today we got a message from CCP that they didn't like the way advertise in Jita, Amarr and other crowded Systems. Therefor a couple of our accounts are locked out for 14 days, until 27-11-2013. Also the account Bella Louisa is not accesable at the moment.
"This means that if you try to contact Bella or did a withdrawal request recently, it can only be processed after 27-11-2013
"We understand that this can be a very inconvenient situation. Our traders however can still work, since they are in other accounts and other corporations. So if your ISK is in your account it will still grow with the normal 4.5%. Transferring ISK and answering mails or convo's is not possible until 27-11-2013.
"For the time being Asiuol Alleb is a temporary character and available for questions. She is member of the University of Caille since we were not able to add her to the Minevest Corporation due to the temporary locked out accounts"

Checking the website the operation first went public on 28 May 2013 and this was the first post indicating that CCP had banned any accounts associated with the venture.  So apparently the length of a ban for a first offense is 14 days, although I have not confirmed that length with CCP.

UPDATE:  According to CCP Stillman, spambots will fall under the traditional bot banning two-strikes and you're out policy.  The reason for a 14 day ban instead of a 30 day ban is that CCP has not historically enforced the no spambot policy.  That will change at a later date.

So at this point things look promising for Team Security and everyone who wants to see the spambots finally disappear from New Eden.  But don't celebrate too much yet as the battle has just begun.  The botters will probe looking for the weaknesses in CCP's defenses.  But for now enjoy the respite from the spambots.
Posted by NoizyGamer at 7:00 AM