Where In New Eden Are The Servant Sisters Of EVE?

Now, most people want to know about the new ships, the Astero-class frigate and Stratios-class cruiser.  Others are pluming the depths of the clues CCP has seeded to make brilliant connections about the nature of the Sisters' role in upcoming events.  Into this sea of talent I don't have much to offer, except space geography.

I shouldn't denigrate the field, because internet space geography is serious business.  But today's post isn't about super-capital force projection or jump bridge networks.  No, today's post examines where to find those SoE level 4 mission agents required to quickly acquire the loyalty points needed to obtain those sweet, sweet ships.  Along the way perhaps some additional information about the Sisters of EVE.


First, geography isn't just about maps and places.  Geography also looks at people.  Knowing a little bit about the Sisters might explain why they are located where they are in New Eden.  So here is a description from the Evelopedia:


"The Sisters of EVE are mainly known for their humanitarian aid efforts, focused on those suffering because of war, famine or the sudden arrivals of capsuleers. The Sisters base their existence on strong religious beliefs, but have coupled them with scientific facts. They believe that the EVE Gate is a gateway to heaven and that God resides on the other side of the gate. As well as dedicating themselves to aiding those in need, they are also busy with scientific experiments around the EVE Gate, hoping to gain a better understanding of the forces at work there. There has been some internal strife among the Sisters in recent times, and there is some evidence that some of their acolytes are at odds over their purpose in New Eden."

Because of the need to study the EVE Gate, the Sisters need to try to not antagonize the Amarr Empire.  Looking at a map of the location of the Sisters' level 4 agents shows this.

After CCP promoted two level 3 distribution agents to become level 4 security agents, the three corporations that make up the Servant Sisters of EVE have 11 agents.  The agents are:

The Sanctuary
Food Relief
Sisters of EVE
Notice the placement of the agents.  Four in the Gallente Federation, three in the Amarr Empire, two in null security space, and one each in the Caldari State and Minmatar Republic.  Obviously, the Sisters are not trying to antagonize the Amarr by having a high level presence in the Republic.  Even the one level 4 agent in the Republic was recently added, with an agent also promoted in the Empire as a political counter-balance.  And given some of the sites in Lanngisi, the posting of an agent there is clearly a result of the refugee problem in the Ani Constellation and not an overture to the Matari government.

The locations of the agents also indicates why the new ships are armor tanked with large drone bays.  While The Sanctuary is located in space populated by the Guristas, the majority of the agents are located in the Federation and the Empire, two factions that rely on armor tanking and drones.  So while the Astero and the Stratios are designed for long deployments, when they return they can dock for refitting and repair at any of the local stations, not just at Sisters-run facilities.

A look at the Sisters' home constellation in Pure Blind also reveals some interesting information. 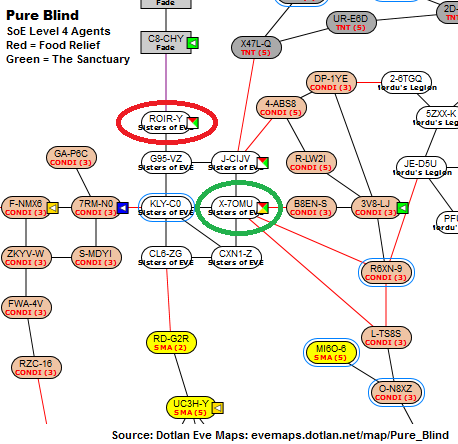 First, notice that they are surrounded by Goonswarm, Tactical Narcotics Team, and Space Monkee's Alliance.  The systems in grey in Fade in the above map are currently controlled by Space Monkee's Alliance.  In other words, the Sisters are surrounded by the CFC, although Lonetrek high sec is only 6 jumps away and Placid low sec is 8.  With such a powerful entity at the gates does anyone find the Sisters desire for cloaky ships unusual?  If the Sisters continue on this development path, could we see The Sanctuary develop a tech 1 black ops battleship to help avoid the inevitable gate camps?  While their tech 1 cloaky ships have inferior stealth capability, the fact the Sisters' have such technology at all suggests the possibility does exist.

Potential help is available from Mordu's Legion two systems away, with only the Goon's control of R6XN-9 separating the two.  Currently the Sisters and Mordu's Legion are neutral towards each other, which leaves open the possibility of cooperation (or the Sisters just paying Muryia Mordu's price).

One final item on the map is still outstanding.  No, not the fact that unlike the true pirate factions, that the Sisters can sell ships in high sec.  The little fact that CCP Rise didn't mention in his dev blog.  The Astero and the Stratios are available from the Sisters of EVE in empire space and The Sanctuary in null sec.  But Food Relief was not mentioned.  Players should not just assume that all the corporations within The Servant Sisters of EVE will offer the new ships.  With a level 4 Food Relief agent in the same constellation as The Sanctuary, the possibility always exists that people could become confused and run a lot of missions for the wrong agent.

So that is a quick rundown of the Sisters of EVE and their location in New Eden.  Along the way looking at the map revealed a little more than just how to find an agent.  Space geography isn't just about how to get to point A to point B or what is in a system.  Sometimes the field allows one to understand some relationships and possibilities as well.
Posted by NoizyGamer at 7:00 AM