Two weeks ago CCP Peligro and CCP Stillman made an appearance in Jita to witness firsthand the silence of the spambots.  The difference in the amount of chat traffic in Jita after Team Security implemented the anti-spambot traffic was striking.


But the real question isn't the initial success of the anti-spambot measures or how many botters were banned.  The true measure is whether the changes are permanent or just temporary.  With the initial bans of the spambots ending on 26 November I decided to revisit Jita and see if the spambots had retaken control of local.

Overall, the results I found using the tools Chribba built into Eve-Live.com were encouraging.  Comparing yesterday with the first full day when the anti-bot measures too effect, we see that the number of lines increased by 15.2% while the number of characters who actually spoke in Jita local dropped by 14.1%.  Also, the length of the average line of text increased from 49.2 characters up to 61.6 characters.  That was still better than the 81.9 characters per line of text before the anti-bot measures went into effect, but an indication that some bots were sneaking in. 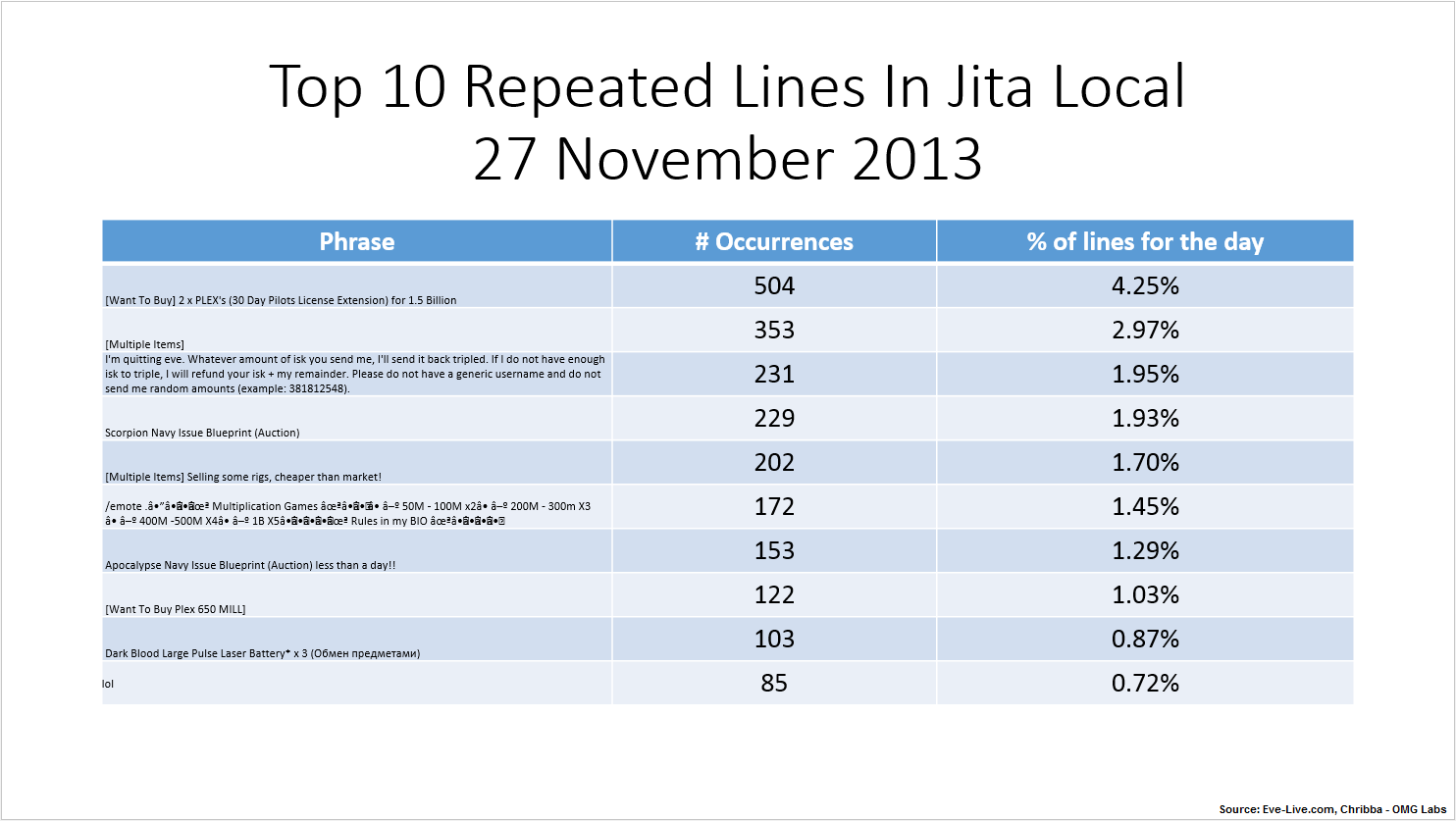 So the next step was to look at the most often repeated lines in Jita.  I looked at the first 3 lines.  Did I find bots?  I think so.

The character that had the most lines in Jita on both the 26th and 27th was Propheccor.  Is he a bot?  Well, considering he was created on 25 November, I'd say yes.  Also because on the 26th the bot had some times that were pretty consistent with a macro running with a very minimal variation in time.  On the 27th the timing became more varied.

The second most frequently repeated line was [Multiple Items].  Many characters used it, but Princess Amphetamine was remarkable for her ability to regularly display her goods in local.  Princess Amphetamine returned to Jita on 23 November and started spamming local with this message a few hours at a time, sometimes with a delay of greater than 5 minutes.

The final line I looked at was generated by a character called Rolex King.  He began his EVE career on 25 November and within two hours had made his way to Jita to begin his career as an ISK doubler.  That apparently fell through because after 12 hours of that he decided to leave EVE, spamming a message every 124 seconds when he was logged in.  Looks like a bot to me.

Now, please do not take this as a criticism of Team Security.  The anti-spam campaign only started two weeks ago.  I have confidence that any detection scripts running will have the parameters refined over time to become more capable.  Don't forget that the top spammers only became active in the last 4 days, which indicates that other characters are receiving bans.  Also, the amount of spam, as indicated by the raw chat totals, has gone down.  So things are looking up for those annoyed by spambots.  We just need to keep watch to see that the progress continues.
Posted by NoizyGamer at 10:12 AM