@GRN_EveRadio @kirithkodachi I'll let you take one guess at the expression on my face right now.
— Helicity Boson (@HelicityBoson) November 6, 2013

Last Wednesday, EVE Radio DJs Wiggles and BigCountry pulled a troll about all 0.5 security systems losing CONCORD protection on Wiggles talk show.  Needless to say, people like Helicity Bosun were very happy, right up until the time the troll was revealed.

But what would empire space look like if CCP actually went ahead and made Helicity's dream come true?  I can't say for all of New Eden, but I have enough data to try to preview how such a change would affect the Minmatar Republic.

First, since EVE Online is perhaps the premier economic world simulation in the MMO genre, let's look at the effect on high sec resources.  First, what is the effect on planetary interaction? 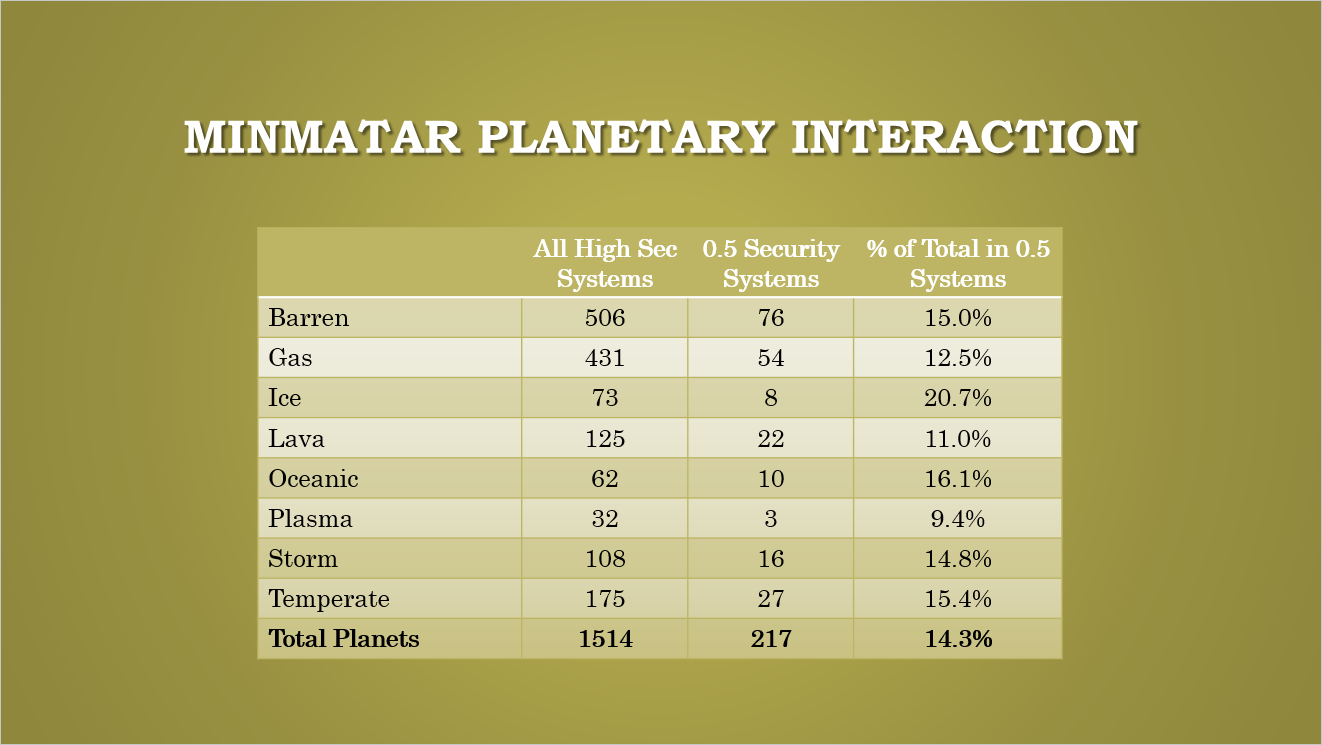 The 0.5 security systems contain 14.3% of the planets in Minmatar high security space.  If low sec is any indicator, the removal of CONCORD's restrictive regulations would actually increase the productivity of the planetary populations.  An increased supply of goods flowing from low security space to the manufacturers in high sec could result in industrialists producing lower-cost goods (or pocketing bigger profits).  Of course, the increased supply would result in lower profits for the capsuleers actually engaged in the production of planetary interaction products in high sec. 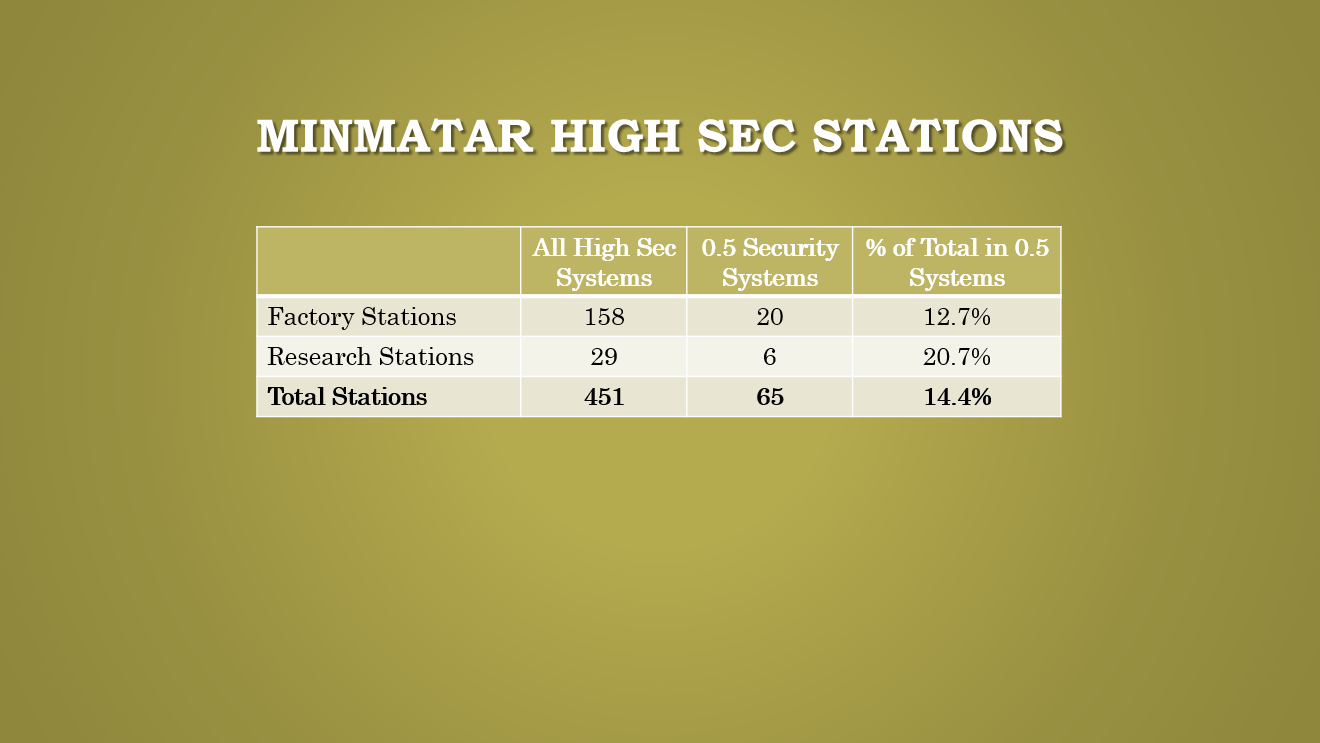 Continuing with manufacturing, how much in station services used by the high sec industrialist would move into low sec?  The move of 120 invention and copying slots isn't horrible to overcome, except for those unwilling to brave a quick trip in-and-out to low.  The bigger impact is the removal of 1000 manufacturing slots from high sec.  Moving bulk materials is riskier in low sec and the high sec industrialist is famous for not taking physical risks.  I know that the Minmatar Republic has excess capacity in its NPC stations, but that probably would not hold true following a move of 0.5 systems to low security space. 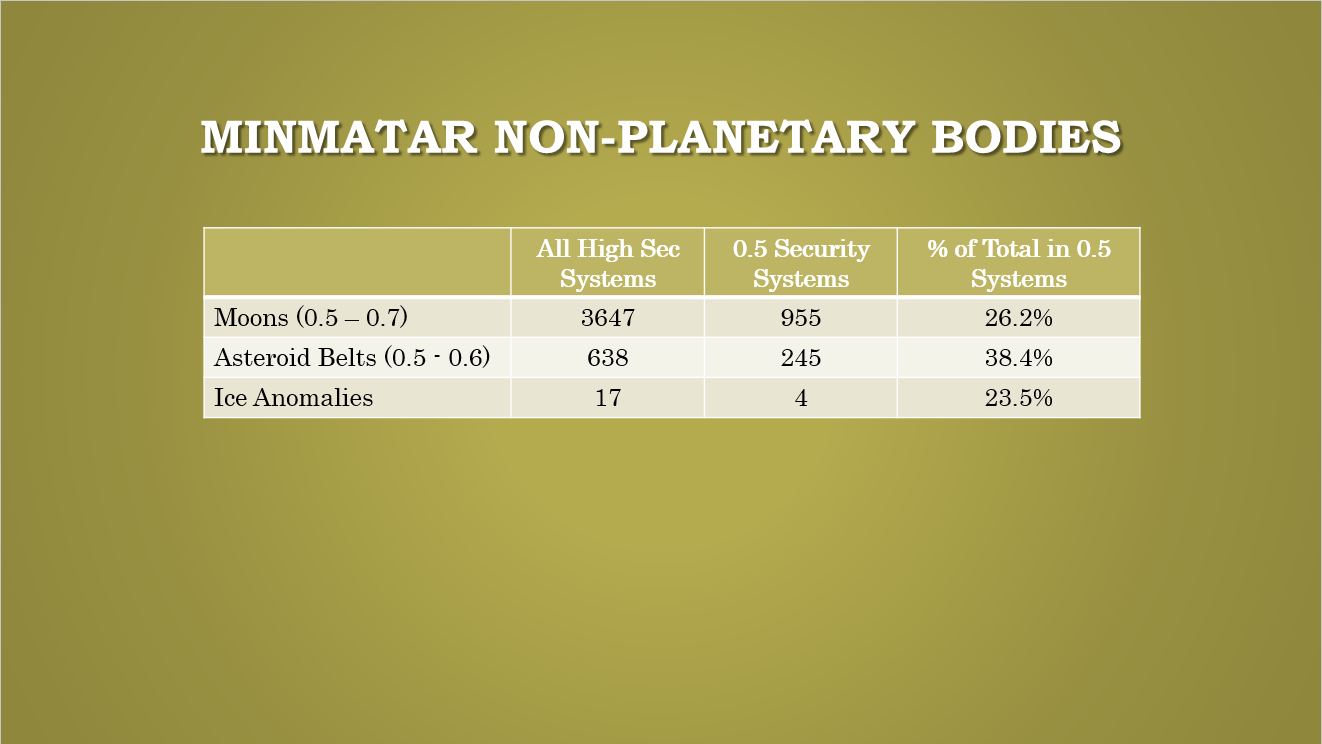 That's because at the same time that the Republic lost 1,000 manufacturing slots to low sec, Minmatar high sec is losing 955 moons where capsuleers can anchor player-owned stations.  I don't see high sec industrialists attempting to maintain their player-owned stations in low security space.  I do see the wealthier industrialists instead hiring mercenaries to clear out the POS owned by small corps to obtain some of the suddenly more valuable space.

With the reduced manufacturing activity in high sec, I'm not sure how deeply the loss of 4 ice systems and 38% of the high sec systems containing omber will hurt the Republic's high sec industrialists.  Omber is an important ore because it is the only high sec ore in the Republic (outside anomalies) that provides isogen.  Losing that much potential capacity could hurt even a shrinking economic base.

But I'm not sure CCP would just flip a switch and turn CONCORD off in all 0.5 systems.  That analysis requires a region by region analysis.  Let's start with the smallest region, Molden Heath. 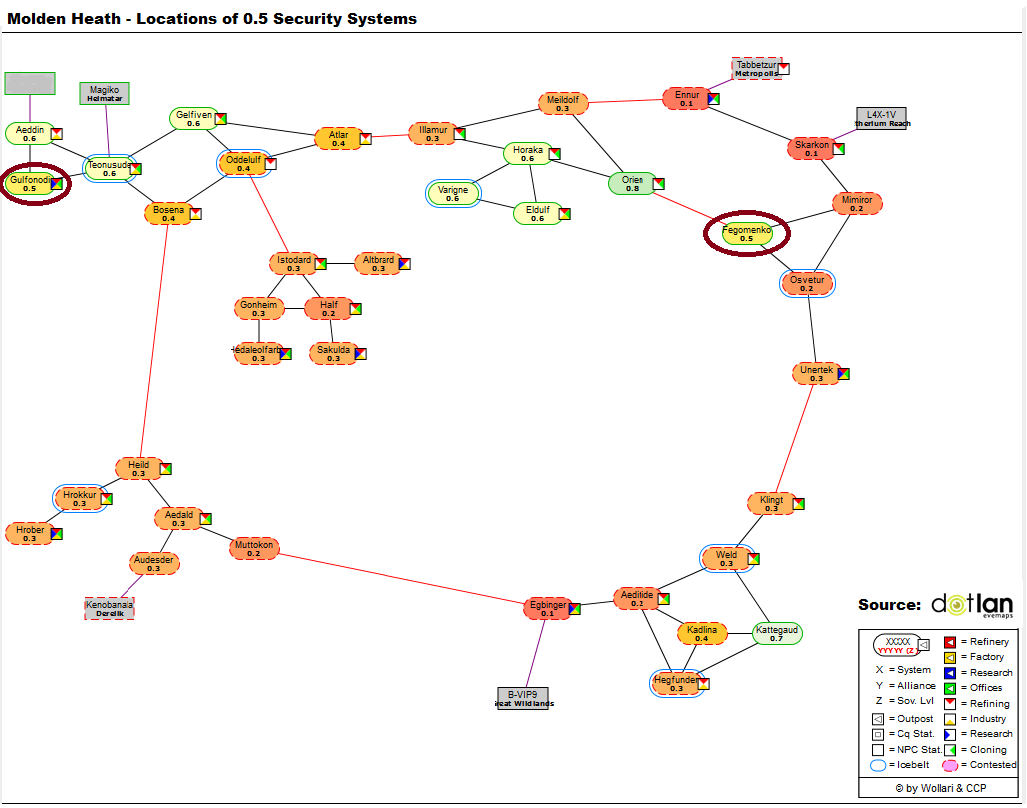 Molden Heath only contains two 0.5 systems, Gulfonodi and Fegomenko.  CONCORD abandoning Fegomenko doesn't really pose a problem, but Gulfonodi contains 11 stations, making the system a significant missioning hub.  Still, Gulfonodi is not the path of a major travel route, so pulling CONCORD out makes sense.  The question is whether Republic Fleet's two stations hold enough forces to maintain order.  Against capsuleers?  Probably not. 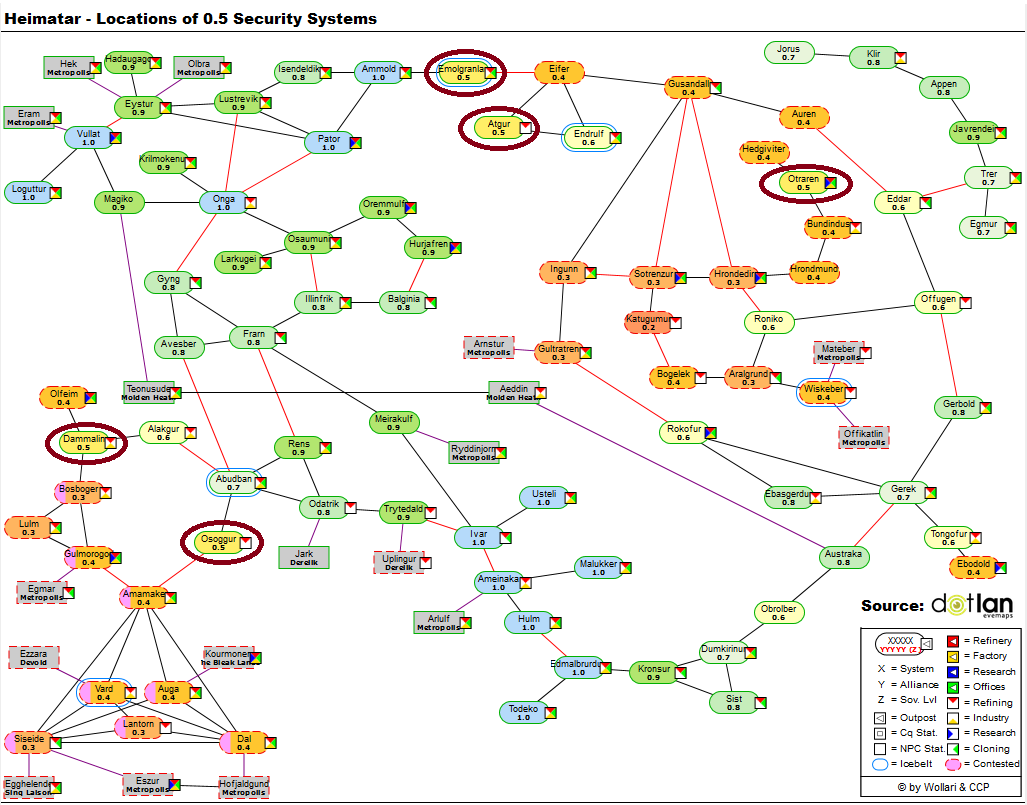 For Heimatar, moving all 0.5 security systems to low sec almost makes sense.  Otraren is very isolated from the rest of high sec.  The only reason CONCORD probably kept a fleet presence in the system are the 5 stations in the system with 250 manufacturing, 20 invention and 20 copying slots.  One additional interesting piece of information is that Otraren also holds a station owned by the Jovian corporation Impro.

The withdrawal of CONCORD from Dammalin would allow Amarr pilots to chase Minmatar militia pilots into their station in Olfeim.  Making Atgur a low sec system makes sense as the only station is owned by the Thukker Tribe NPC corporation Trust Partners.  Not only does the high sec pocket get smaller but the Thukkers and CONCORD don't really get along.  Osoggur is interesting as turning that into a low sec system means that miner gankers in events like Hulkageddon could stage next to the ice fields in Abudban.

The only system in Heimatar I could see CCP not turning into low sec is Emolgranlan.  The system is adjacent to the rookie system of Ammold.  I really do not see CCP placing a low sec system adjacent to a rookie system where new players can wander into a gate camp before learning what low sec really means. 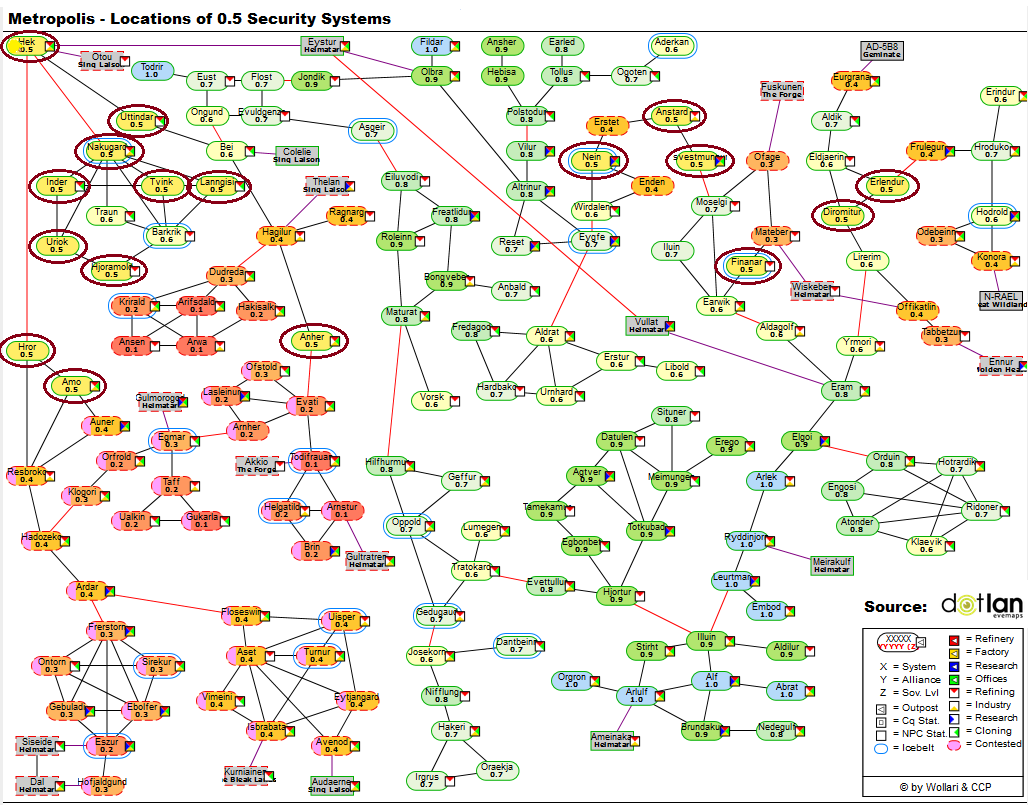 The region the map really gets interesting in is Metropolis.  A total of 17 systems would move out of high sec.  In the north-east quadrant of the map, the withdrawal from the non-station systems of Erlendur and Diromitur not only leave the three high sec systems in the Hulf constellation even more isolated, but creates a new high sec pocket consisting of Aldik and Eldjaerin.  In addition, the low sec pocket in the Ergruk system would expand from two to five systems with the additions of Anstard, Nein, and Osvestmunnur.  One interesting development with that move is that, combined with Otraren also becoming low sec, would mean the Jovian corporation Impro would have no high sec presence in the Republic.  Of course, that's probably not significant since Jovian agents were removed from the game.

The north-east quadrant is where matters would get interesting.  Not only would flipping Amo and Hror make the entire Tiat constellation part of low sec, but the Amarr militia would have direct access to another system that hands out factional warfare missions for the Minmatar.  A big uproar would occur with the changes that would take place in the Barvigrard constellation.  That would put Anher, Hek, and Uttindar into low sec.  Hek, one of the major trade hubs in New Eden, would become low sec and would quickly lose its importance as high sec players established another system in which to do business.

I do not think CCP would move the six 0.5 security systems in the Ani constellation into low sec. Looking at the maps, CCP would need to create two additional gates, both of which would connect to the system of Bei.  The first would connect Bei to Lanngisi.  I choose that for two reasons.  The first is that I don't believe that CCP would want to scare anyone away from the COSMOS content by requiring a trip through low sec, although I did do a couple of COSMOS missions that had a low sec component.  The second is that by providing a high sec route that is longer to travel than the one hop into low sec that the Eystur to Nakugard route would require that CCP could create an opportunity for people nervous about traveling through low sec a place to dip their toes into the water.

The second, and more important gate, would run between Bei and Abenync in Sinq Laison.  The Bei/Colelie gates are the traditional route between the Gallente Federation and the Republic, but Colelie is a 0.5 system.  While some might prefer gates between Bei and Doussivitte, Colelie is a system without a station so I imagine the game developers would want the new stargate to connect to another stationless system.

The above is just a quick look at the effects in the Minmatar Republic if CCP were to remove CONCORD from all 0.5 security systems.  After looking at the matter I don't believe that CCP would ever do such a thing.  If they did, however, I pointed out the systems that would not receive changes and the additional jump gates CCP would build in order to make the plan fit existing features and game design principles.  I should add, this analysis is just a thought exercise brought about by a troll.  So please, don't start shooting statues in Jita.

Note: All system data and maps collected from Dotlan Eve Maps.
Posted by NoizyGamer at 7:00 AM