As game time code resellers and their affiliates scramble to comply with the change in the interpretation of how the GTC resellers agreement interacts with the EVE Online End License Users Agreement, one website is determined to milk the situation for all the real world money possible.  SOMERblink, the gambling website at the heart of the controversy, has raised its bonus for purchasing a 60-day game time code from Markee Dragon from 200 million ISK per GTC to 1 billion ISK per GTC.  Here is statement put out by SOMERblink on its front page:


"CCP is changing policy and has asked that we discontinue the bonus credit program after November 7th.  So until then, enjoy a super-bonus of 1B Blink Credit for each 60-day GTC you buy!

"Thanks to everyone who has helped support our server costs by buying through the affiliate link :)

"The bonus will go away after the 7th, so we'll be investigating other options to cover the server expense after the GTC money runs out :)"


On Monday I posted an explanation of the policy that allowed giving away ISK for GTC referrals from the Chief Operating Officer of Shattered Crystal, Dennis Hutchinson...


When I pressed him for an explanation, Mr. Hutchinson first pointed me to point 2 of the EVE Time Code Bazaar rules, "Any form of ETC trading outside of the CCP created system is not permitted or supported by CCP." As I had also asked if he knew if CCP had approved of SOMERblink's "purchase GTCs, get ISK" promotion, he included that in his explanation...

I also wrote on Monday that I disagreed that the rules of the Time Code Bazaar should override the EULA and Terms of Service.  Apparently CCP's legal staff agreed, which has led to the shakeup.

One thing I found curious about the statement is the claim that SOMERblink will have no money coming in from GTC sales referrals after 7 November.  On its face that makes no sense.  CCP did not outlaw the ability of the GTC resellers from having affiliate programs.  They only told the resellers that their affiliates had to follow the EULA. 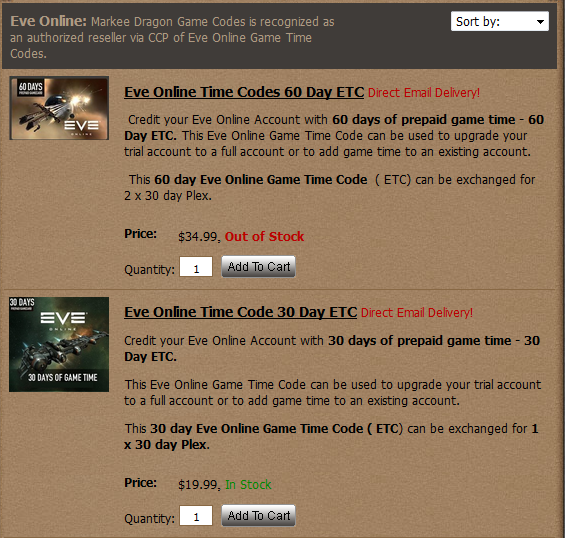 In the meantime the demand at SOMERblink is high.  In fact, Markee Dragon ran out of 60-day game time codes within 3 hours of the offer going live.  So the madness ended temporarily until Markee Dragon can purchase more time codes from CCP.  So will we see Markee Dragon end its relationship with SOMERblink before putting any more GTCs up for sale?  A lot of people are watching, wondering what will happen next.
Posted by NoizyGamer at 7:00 AM