CCP's War On Illicit RMT: Not Crossing The Rubicon

Rubicon.  For most, an expansion means shiny new ships and interesting features that players fight over.  But in the illicit RMT economy, an expansion means the possibility of increased sales as players try to buy their way to power.  At the same time, Team Security starts slipping in new code and procedures to attempt to stop, or at least slow down, the ISK rush.

Usually at expansion time I'm reading the botting forums and sharing the tears of botters as the bot devs don't fix their bots fast enough.  Or even better, the tears of the botters as Team Security sneaks in a trick that results in a ban wave.  But this launch week saw something I didn't expect; two RMT websites going out of the ISK-selling business.


The first one isn't too big of a surprise to me.  In Game Delivery is one of three RMT sites that I track that are owned by the same organization.  The website has also consistently sold ISK at rates higher than a player could get by purchasing 2 PLEX or a 60-day game time code and turning them into ISK in Jita since the beginning of September.  In Game Delivery is usually the one with the highest prices of the three and is the first to raise prices when the supply of available ISK drops.  Seeing them remove EVE Online from their list of games indicates that organization has ISK supply problems.

The second, IGXE, is a rather different story.  The website was founded in 2004 and the company has offices in the U.S. and China.  The site usually sold ISK around the median price of the sites I track.  The fact that its EVE Online page threw a 404 error and the game was de-listed when I checked yesterday was a big surprise. 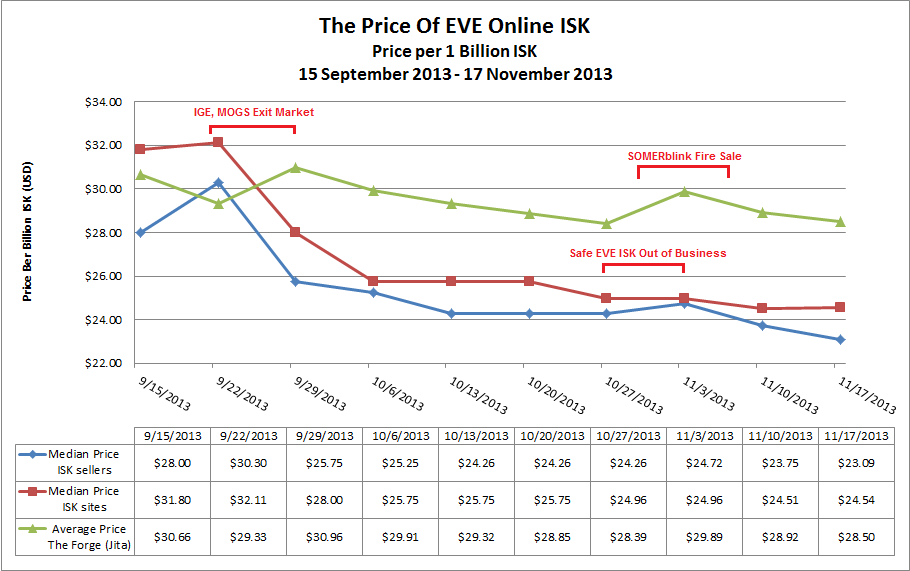 I am beginning to wonder if the changes to ice mining and null sec anomalies in Odyssey really took a toll on the available black market ISK by the end of the expansion.  Not only are the illicit RMT sites faced with the PLEX ceiling, they also have a floor.  Many of the big sites outsource their in-game currency gathering to affiliates.  But what if those sources can get a better price elsewhere? 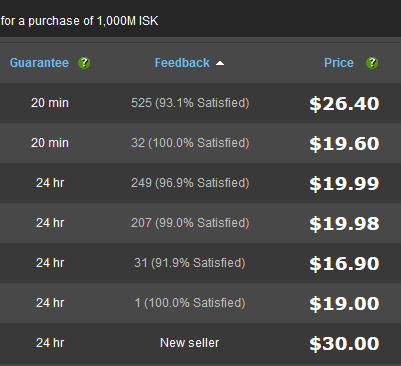 The above graphic was taken from a website that specializes in allowing players to sell their virtual goods and currency.  Some of the websites I monitor actually sell ISK cheaper than what these players are selling their ISK for.  But those sites are EVE-specific websites, not companies that deal in multiple games like IGE and IGXE.  And those companies also have to do things like meet payroll.  Even with much of the labor force in China, I have to imagine the profit margins are getting really thin.

Now, I don't know what the profit margins actually are for these RMT companies.  But for IGXE to get out of the ISK market at the beginning of an expansion could indicate that their business just doesn't attract the sales to turn a profit.  For In Game Delivery to also stop supporting EVE is possibly a sign that two other good-sized websites are also facing problems.

For the short term, however, I expect a slight price decline as the number of RMT companies competing for ISK has declined further.  The slide won't go too far because the floor apparently is rising, at least for the bigger players in the industry.  I also wonder what the new changes in Rubicon, like making the interceptors super-fast and bubble-resistant, will do to the market.  The little I've read indicates botters will down ship and try to stay out of high sec if they are currently in null.

Of course, we don't know what surprises CCP has up their sleeves for the next few months that may impact those who run and supply the illicit RMT websites.  We may never know the details, but we can keep track of the prices and try to figure out what happened.
Posted by NoizyGamer at 9:27 AM