I haven't played Black Desert Online in a couple of years, but I pay attention to the quarterly Pearl Abyss earnings calls because I write about EVE Online. When BDO experienced its record peak concurrent user mark in Japan when the company began self-publishing the game in that country in April 2020, it was only a matter of time before PA began publishing the game globally. Financial analysts asked about self-publishing games on the earnings call back in November. This week, the analysts got their wish, at least as far as BDO is concerned.

I first heard the account transfer process from Kakao to Pearl Abyss is active now from watching a YouTube video this morning. Once I was able to log off of work for the day, I went ahead and went through to transfer request process. 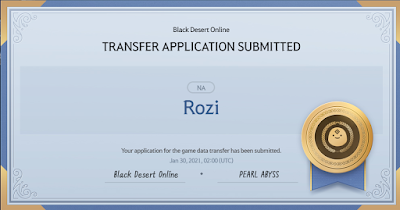 I realized just how much of the game I've forgotten as one set of transfer awards makes no sense to me. I'm including them for those who do. 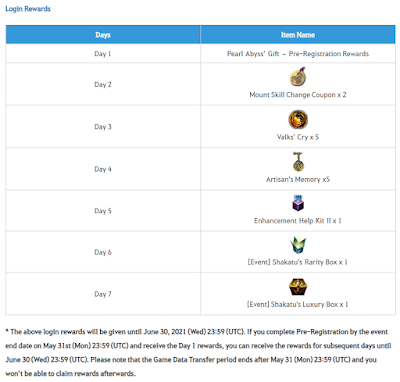 Another set of rewards includes a tier 4 limited cat. I remember cats are important for doing tasks like looting. 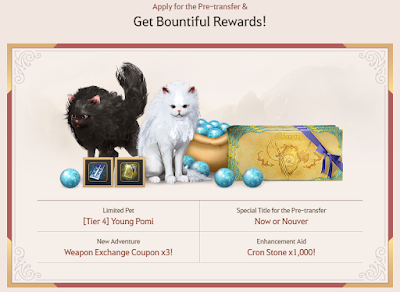 If I haven't played the game in years, why bother with the transfer? As the biggest pay-to-win game I've ever played, I don't want to lose any of the items I purchased in case Pearl Abyss gets the cash shop into some kind of control and I decide to play again. Besides, I get an excuse to reinstall the game on my new computer with a nearly up-to-date video card. The character graphics in BDO were always a little off-putting. Perhaps a new computer will help.

Posted by NoizyGamer at 9:40 PM