One of the pleasant side effects of participating in the Ishgard Restoration title contest was raising my liquid wealth from 2 million gil up to 7.5 million gil. Of course, I couldn't let that amount sit around. I wound up getting involved the highest level of PvP in FFXIV: housing.

Unlike games like Everquest 2 and Elder Scrolls Online, housing in FFXIV is not instanced. Because housing plots are limited, players wind up camping empty plots for hours trying to acquire their first house. Once a player buys a plot, the next step is to purchase a housing permit. Players with housing permits can use the relocation feature to move to a better location. They just need gil to purchase the new plot.

Over the past couple of weeks or so I noticed the free company's Discord starting to chat away about available housing plots. That's right, the FC had scouts out providing intelligence about which plots were available and, more importantly, which plots were uncamped. I think the idea is to get all the players who might want to purchase housing plots in Ishgard a house so they can use the relocation feature to get one of the new plots when Square introduces the new district. 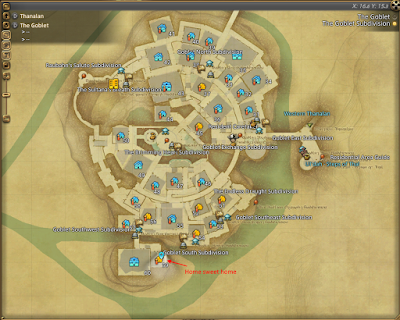 On Friday and Saturday, a lot of plots were available and uncamped, so I wound up camping a ward in The Goblet with 3 plots open in the 31-60 positions. I wound up logging off outside one of the plots, sleeping 30 minutes, then logging back in. Around 3:30am, I was able to buy a plot. Ward 17, plot 59. 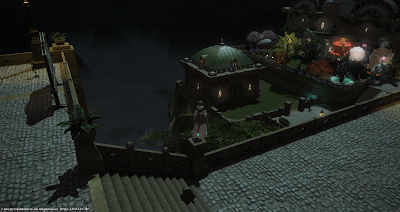 Getting a plot was just the beginning. I then had to figure out what type of house I wanted. I wound up selecting a composite cottage, as I purchased a small plot. After spending another 450,000 gil, I had a nice little house. 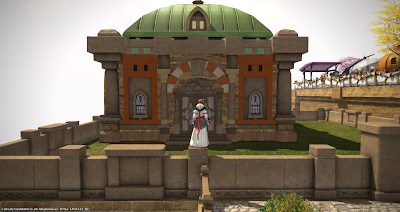 Admittedly, the exterior needs some work. But the game does allow for customization, including the use of dyes. 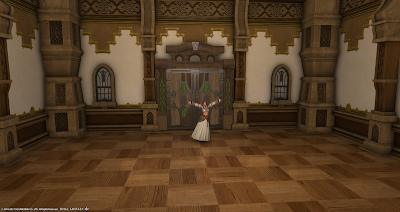 The interior, on the other hand, looks nice right out of the box. The picture above is of the top floor and entrance. I don't feel like I need to start changing the appearance right away, I can concentrate on obtaining functional items like NPCs and bells. 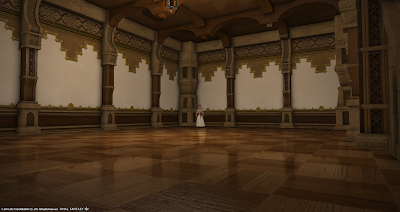 The bottom floor is dug into the ground and a lot longer than the top floor. I placed my character at the far corner to try to give some sort of idea just how large the interior of a "cottage" really is.

When including the miniature aetheryte used for ease of travelling to my house, I've spent approximately 3.6 million gil so far. Looking at the wiki page and some of the videos on YouTube, housing in FFXIV is pretty complex. I have the feeling my new house will take up quite a bit of time and money.

Posted by NoizyGamer at 8:37 PM