Yesterday I managed to get the new minion introduced in Patch 5.41. Trike is a cute little dinosaur one can win by playing the Kupo of Fortune game in The Firmament.

Kupo of Fortune is a game of chance that can be played by delivering certain items to Potkin and collecting stamps on a voucher.

Once you have collected five stamps, you may exchange the voucher for a Kupo of Fortune card. Upon each card, there are four treasure chests depicted by hexagons - one on the left and three on the right. You may choose one chest to scratch open.

The lone chest on the left offers second to fourth prize, while the three chests on the right offer first to fifth, with the fifth being a consolation prize. The prizes available change each time, and we recommend that you review the prize list before playing. 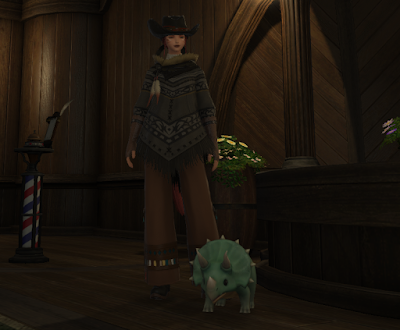 I think Square Enix rigged the game to make getting Trike easier. When I saw Trike, I immediately chose the three hexagon option. I've never seen the top prize icon show up twice on the card before. 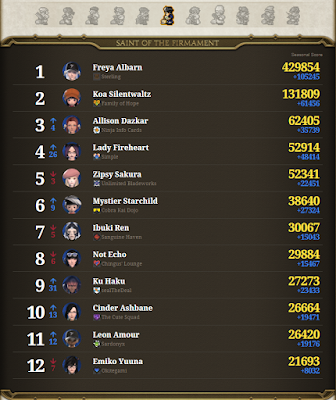 In the rankings chase, Freya Albarn is still far ahead of not just all weavers, but all crafters. The crafter with the most points gets immortalized in a statue. Freya really wants that statue. 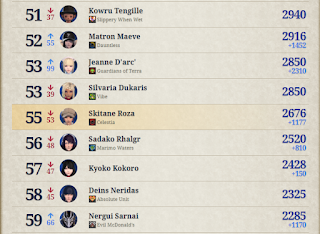 In my personal quest for a title, I fell back down to 55th place despite posting a personal best 1176 Skybuilder points. I'm still doing well, with my total 1828 points over 100th place.

On my monetary goals, I earned another 337 thousand gil on day 3 of the event. The income is slowing down as the amount of crafting material on the market catches up to demand. At this point, the materials sell within an hour or two as long as I keep on top of the market.
Finally, I earned 5160 scrips. I almost have enough to purchase the new Skyworker's Attire introduced with the event. Hopefully I get to show it off in tomorrow's post. Yes, I'm planning on posting an update on a Saturday. I'm still having fun.
Posted by NoizyGamer at 6:36 PM