Yesterday was the final day of the competitive season of stage 4 of the Ishgard Restoration. I need to emphasis "competitive season" because the content is still present to do. If I understand correctly, the gathering and crafting will stay available until the next expansion, so still plenty of time to get some of the items I've described over the last two weeks. If I had to guess, the competition was to kickstart the construction so that the area is finished by the players.

Two worlds in the Japanese data center have successfully completed construction for stage 4. Tonberry on the Elemental server was the first to complete construction, followed by Hades on the Mana server 27 hours later. In North America, Balmung on the Crystal server is out in front, currently working on Snowsoak Springs (29). My world, Hyperion on Primal, is currently working on the 3rd stage of The Eastern Risensong Quarter (23). 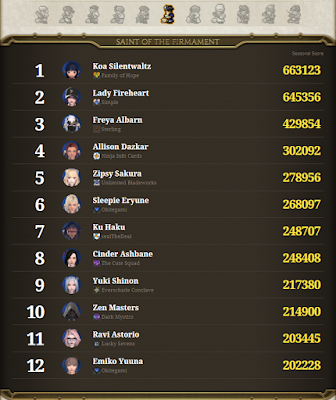 Since I participated as a weaver, my server's leaderboard is of interest. Freya Albarn jumped out to a huge early lead and then stopped. The number of points the top 12 players accumulated is beyond my imagination and those earned the "Saint of the Firmament" title definitely earned it. 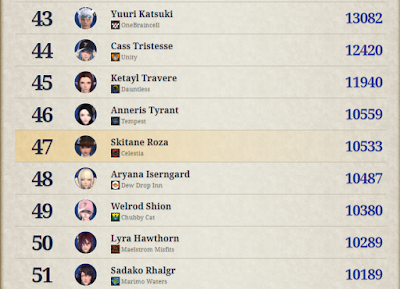 My personal finish was satisfying. I finished in the top 50. I thought I could do 6000 points and finished with over 10,000. I also managed to finish 85th amongst botanists and 89th on the mining list.

I also did very well financially. With the flurry of activity on the final day, I pulled in 706,992 gil as I sold off most of my unused crafting materials. I had a goal of earning 2 million gil, but due to selling so much, I lost track. If I ignore all the sales on the first day and before, I made 4.5 million gil over the last nine days of the event.

Overall, I'm glad I participated in the event. I now have enough gil to purchase a small plot, if one is available. I also still have 8172 scrips to spend on a variety of items. I'm not sure I would play in another event, but I'm glad I did at least once.

Posted by NoizyGamer at 7:13 PM