The one thing that really struck me yesterday while playing Final Fantasy XIV was that some people didn't read the patch notes. I sold a lot of Stage 3 crafting materials on the market and I can't figure out a reason why. The patch notes clearly stated the following:

To coincide with the updates to the Ishgardian Restoration, new materials can now be crafted and submitted.

In accordance with this update, the following additions and adjustments have been made to the submission of materials from the previous chapter:

I gladly took in all the gil, but I can't help but wonder if I missed something.

On the rankings front, things are going pretty much as expected. I don't rank in either mining or botany, but in weaving I'm doing all right. Of course, I'm not at the top of the rankings. 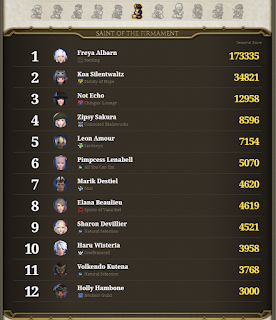 I do not know how someone gets 173,335 points on the first day. Looking at the leaderboards for my server, no one else is even close. For the amount of time I have to play the game, even 3000 points is way outside my capabilities. But I am doing better than expected. 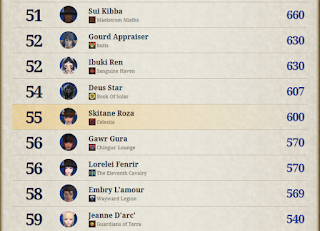 While 12th place has 5 times my 600 points, I have 5 times the number of points a jumble of characters have who are tied for 97th place. Sitting in 55th place after the first day is better than I thought I would do.

The amount of scrips earned yesterday was also very satisfying. I wound up with 3169 for the day. Combined with the number I already had, obtaining the crab mount is within reach tonight.

Finally, the gil is rolling in. Perhaps a little too fast. I originally wanted to record the amounts and items sold. However, I sold so many items the record didn't show all the transactions. Instead, I have to just keep track of the gil I've earned from all market sales. I usually only empty my retainers' wallets on Sunday afternoons. So for from Sunday afternoon to Wednesday morning, I gathered in 855 thousand gil. Through Monday night, I had only sold 250 thousand gil worth of items. I'm well on my way to doubling the amount of money I have in the game.

After one day, I'm going well. But I have another week to go. We'll see what happens as the event goes on.

Posted by NoizyGamer at 6:00 PM